An exciting step forward in the North Shore’s long and storied history of maritime exploration in the Atlantic Ocean is about to happen with the launch of the Ginger Judge, a small, unmanned sailboat. 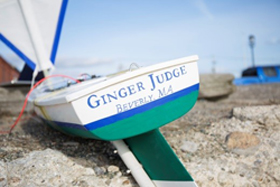 The Ginger Judge, named after a benefactor and alum of Endicott College, Ginger Judge ’51, will be part of the Atlantic Regatta and will be placed far out to sea to be propelled by wind and current. The small but sturdy craft is in a class of vessels known as educational drifters. Similar boats have made it to the Arctic, Africa, Europe and South America; some travel thousands of miles.

What is revolutionary about this project is how it came to be.

Endicott College’s Angle Center for Entrepreneurship, its Center for Leadership, and academic departments within the Science and Technology division partnered with several organizations with the goal of proving technical exploration can happen through collaboration.  Partnering with Marine Oceanographic Technology Network (MOTN), the City of Gloucester, Massachusetts, Gloucester Innovation led by Ric Upton, and The National Oceanic and Atmospheric Administration (NOAA), the project was collaborative from the very beginning, with even the purchase of the boat being crowdfunded by those groups.

"Our coastal heritage continues to develop in new and exciting ways, especially within academic pursuits," said Gloucester Mayor Sefatia Romeo Theken. "Working with community partners like Endicott College, MOTN and NOAA on oceanic innovation through smart ideas like the Ginger Judge mini boat showcases the best our community can offer through meaningful collaborations."

The boat has been housed in the Makerspace in Endicott College’s Ginger Judge Science Center, where it was outfitted with an Arduino-based data acquisition system that collects water temperature, water pH, water oxygen content and a simple Inertial Measurement Unit (IMU) to provide a quick determination of sea state. The data will be transmitted to a satellite network every two hours. Todd Rodgers, a principal in Gloucester Innovation, volunteered his technical expertise to build the on-board technology.

“What the students and staff at the Angle Center are doing with Ginger Judge, in which MOTN is proudly participating, transcends from the merely remarkable to the wonderful,” noted Harlan Doliner, president of MOTN. “It is so fitting that this proud little vessel will feature cutting-edge technology adapted for the oceanic environment. That the on-board adaptation of the technology is a joint effort of the Angle Center, Jim Manning from NOAA and private industry is the frosting on the cake.”

Marc Polombo, a Cape Cod lobsterman, has offered to bring the Ginger Judge beyond coastal currents and deploy it from his boat, the F/V Terri Ann.  The team is looking towards a mid-February launch, depending on weather conditions. Once launched, the Ginger Judge can be tracked on its Atlantic Ocean journey by going to: http://www.nefsc.noaa.gov/drifter/drift_X.html and looking for the boat’s identifying number: 172400711.