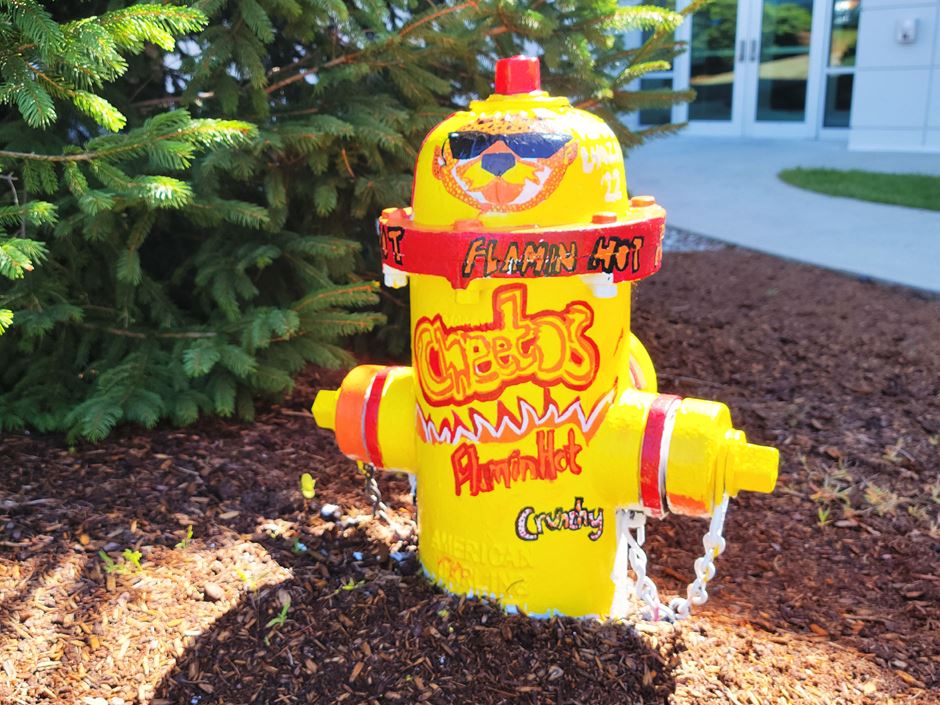 It’s a long-running tradition for students to paint the campus fire hydrants—but first they must spend the summer painting the residence halls.
By: Sarah Sweeney

Pemma Lhazin ’23 had no painting experience when she applied for a summer job at Endicott on Handshake.

“It was nice being on campus over the summer because it was quiet, slow, and peaceful,” said the international studies major, who spent the summer painting residence halls and other buildings under the supervision of Physical Plant Painting Supervisor Thomas Maniates.

“I was able to save up some money while also having a good time with my friends,” said Lhazin.

Lhazin, who is from Bhutan, was one of a handful of summer helpers who transform campus before the academic year begins again.

It’s a longstanding tradition that began when the late former President Richard E. Wylie approached Maniates about utilizing students to assist with minor campus updates over the summer.

Maniates—known fondly among his peers as “Tommy Picasso”—helped Wylie implement the painting program that kicked off in 2000 and lives on today.

“We give students an extra incentive for their work,” Maniates said, “which is to pick a fire hydrant at the end of the summer. They prime it, finish it, and they can draw anything they want.”

Hannah Herron ’24 said she had no experience painting “the right way” until her summer job.

“I would always get paint all over me. People would say, ‘That paint is supposed to go on the walls, not you!’” she recalled.

Maniates estimates that 90% of students don’t know how to paint before starting their summer gig but that, by summer’s end, they’re so burnt out from seeing the same shade of linen white day in, day out, that decorating the fire hydrants becomes its own unique treat.

Then, of course, there are the actual treats. “I often take them to Captain Dusty’s for ice cream,” added Maniates.

Herron, a North Shore native who is passionate about marine biology and oceanography, turned her Endicott Hall hydrant into a geographical homage to the region.

“I tried my best to mimic some of the landscape and islands from places on the northern coastline of the North Shore,” she said.

A digital media major, Herron is also pursuing studies in geographic information systems. “I repainted the top of the hydrant five different times,” she said. “I was trying to incorporate bathymetric measurements for each area but I didn’t want too much writing on it.”

While fire hydrants are a relatively small canvas—and seemingly easy to decorate—the students faced unique trials along the way.

“My fire hydrant was right next to a bush, so it was hard painting some of the sides,” explained Lhazin. “I’m also not a very artistic person, so it was an interesting challenge.”

There was also the record-breaking heat to contend with.

“Tommy was always there bringing us water and trying to find umbrellas for us,” Lhazin said. “Craig [Kent, Physical Plant painter] also always checked on us to see if we were okay and if we needed breaks.”

Director of Facilities Rick Gagnon said he picks the summer students with the help of other campus officials, and the hydrant designs stick around until the students graduate.

“It’s a very nice tradition and a fantastic way to wrap up the summer after painting and going through the dorms,” Herron said. “We got to see a lot of spots that nobody really goes into to paint them. I felt like I was learning a lot about making my Endicott experience my own.”

For Maniates, though, these summer gigs are something bigger.

“I raised three kids and these students become like my kids,” said Maniates. “It’s fun, but it’s very gratifying.” 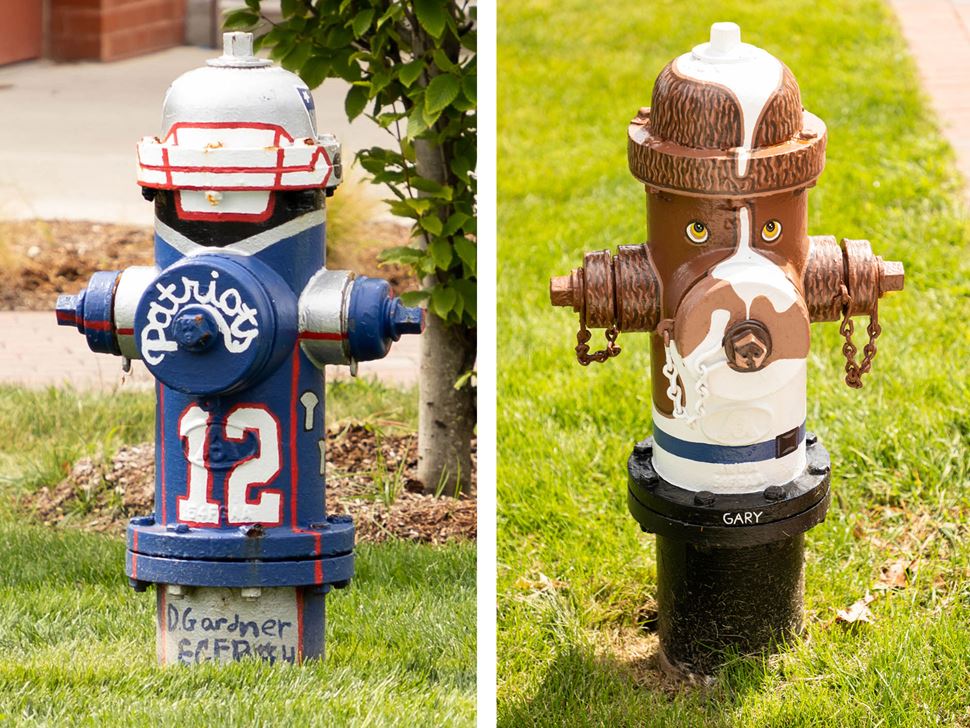 previous next
In Pictures
An homage to the Patriots’ former quarterback … and for campus comfort dog, Gary. 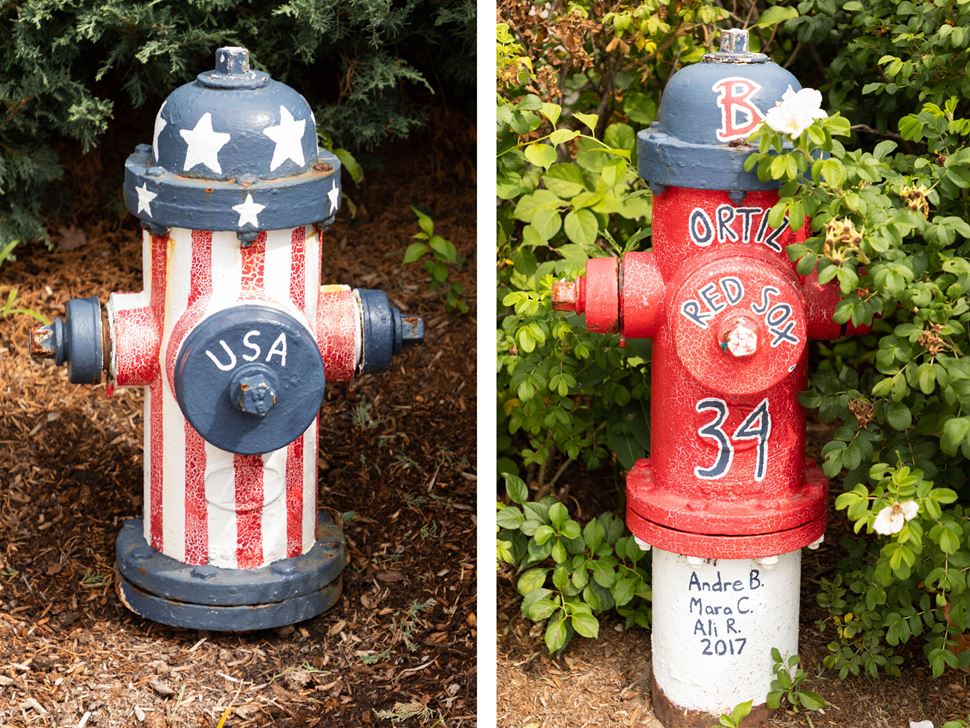 previous next
In Pictures
A star-spangled hydrant, with a side of David Ortiz, who retired from the Red Sox in 2016. 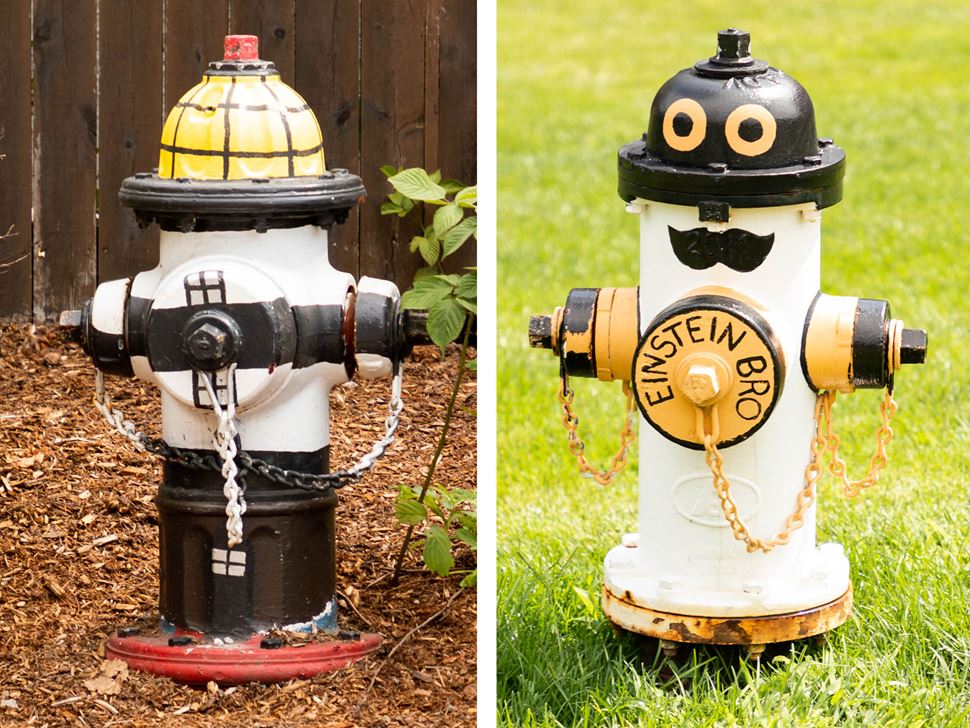 previous next
In Pictures
An old lighthouse meets a mustachioed mascot of Einstein Bros. Bagels. 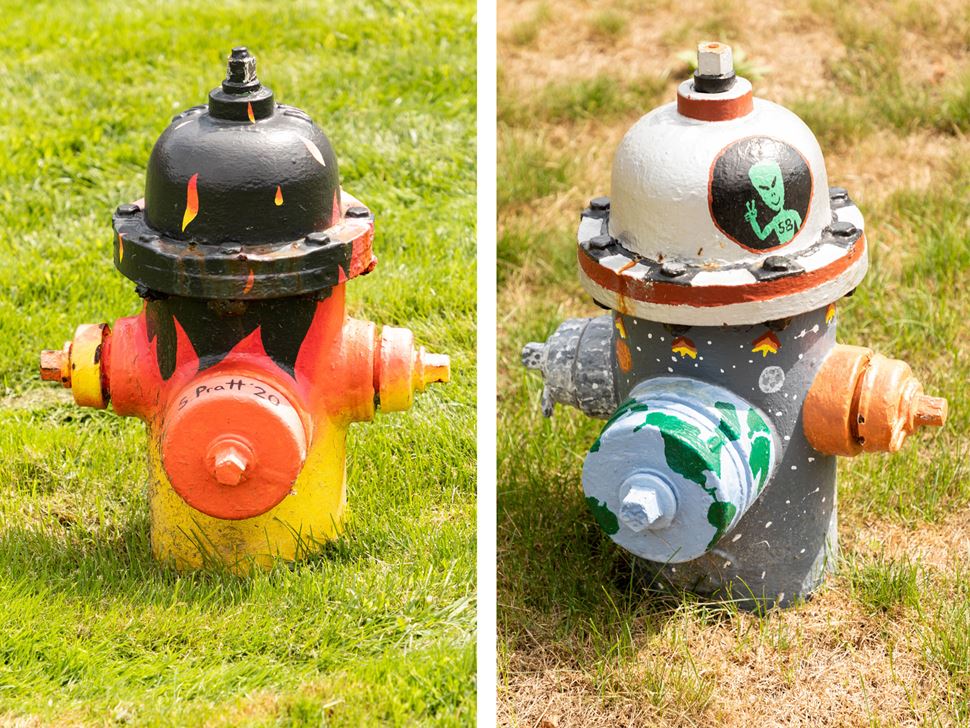 previous next
In Pictures
Flames … and an alien landing. 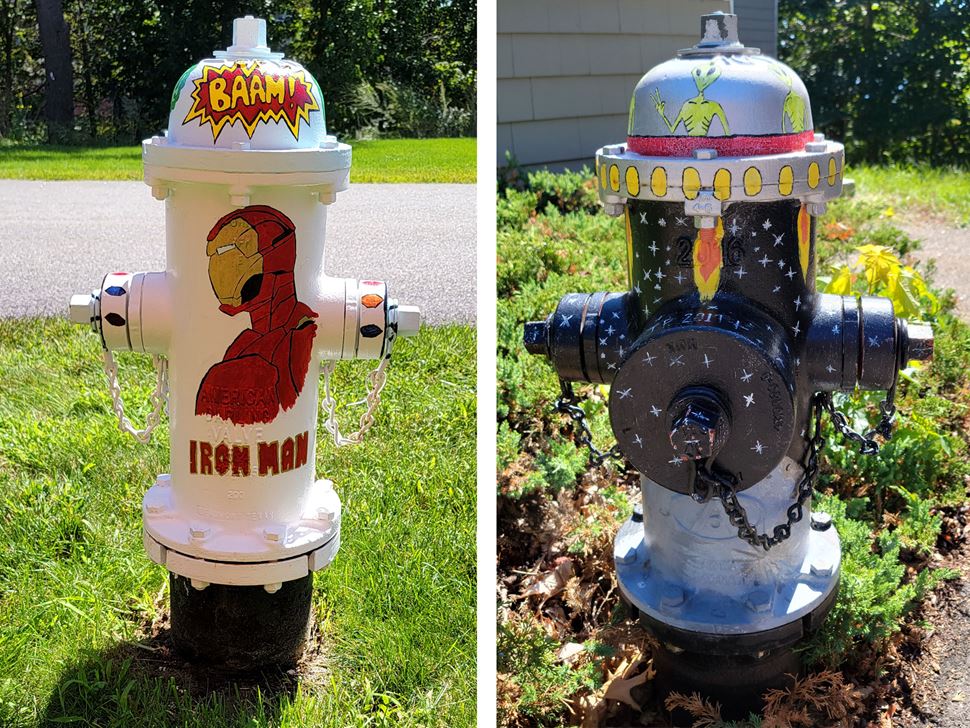 previous next
In Pictures
Iron Man has a new home behind the Wax building—and even more aliens. 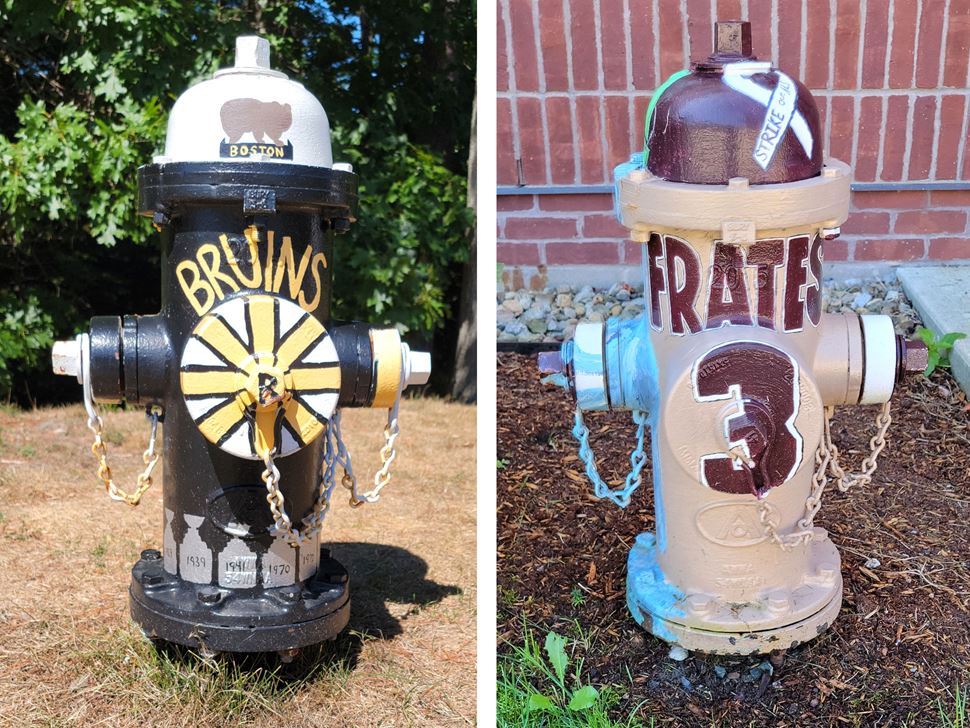 previous next
In Pictures
This Bruins hydrant is located outside of the Raymond J. Bourque Arena, while this ode to the late Peter Frates, a former Boston College baseball captain who raised millions for ALS before passing from the disease, is outside of his namesake Frates Hall. 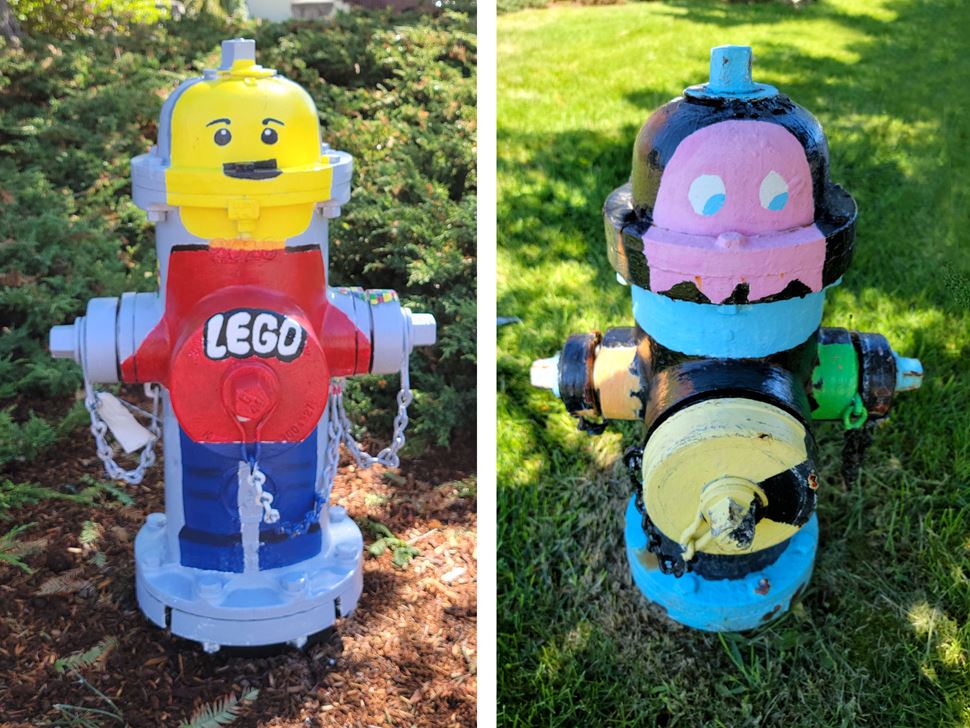 previous next
In Pictures
The LEGO man meets Ms. Pac-Man. 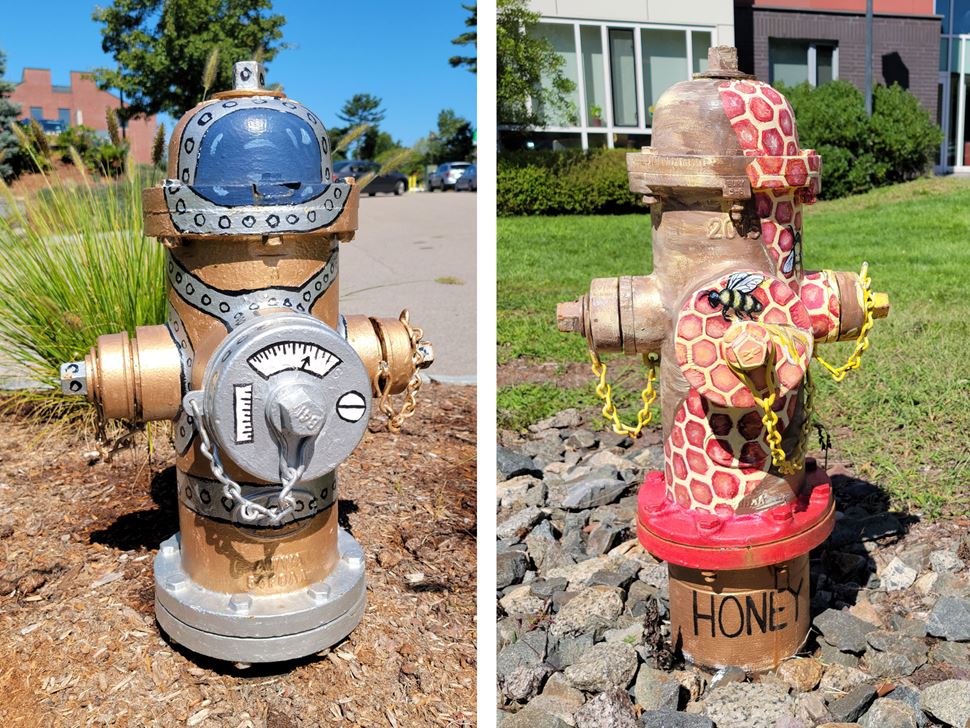 previous next
In Pictures
A depiction of an old-timey, hard-hat diving suit and an Endicott beehive.

previous next
In Pictures
A hydrant honoring Raymond J. Bourque, and this ode to the North Shore from Hannah Herron ’24.
Share This