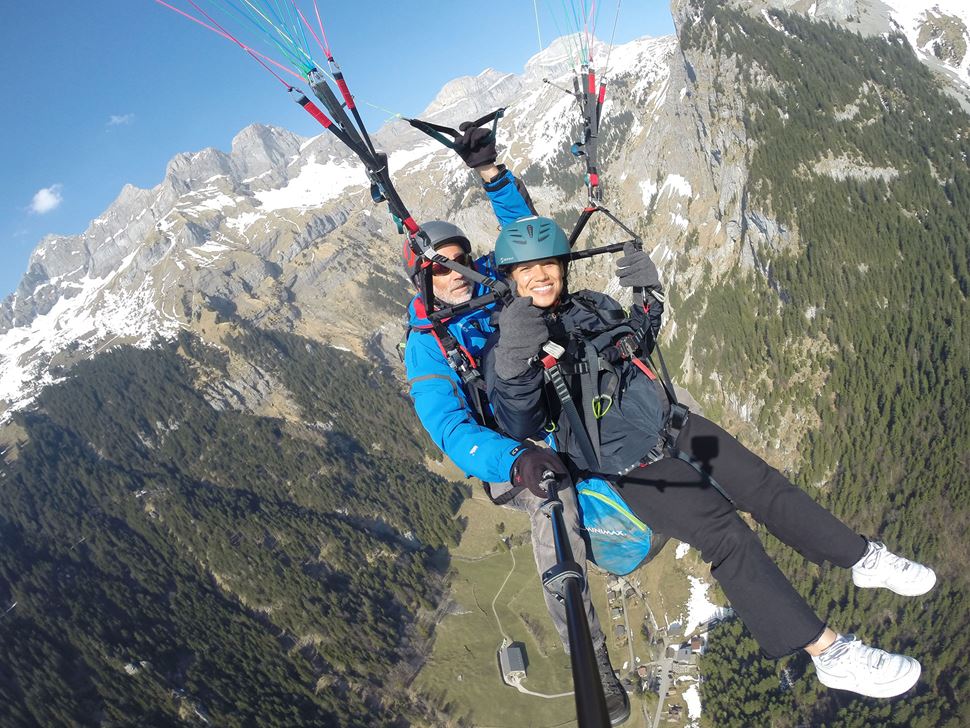 previous next
In Pictures
Angela Battiata ’23 paragliding in Lucerne, Switzerland. 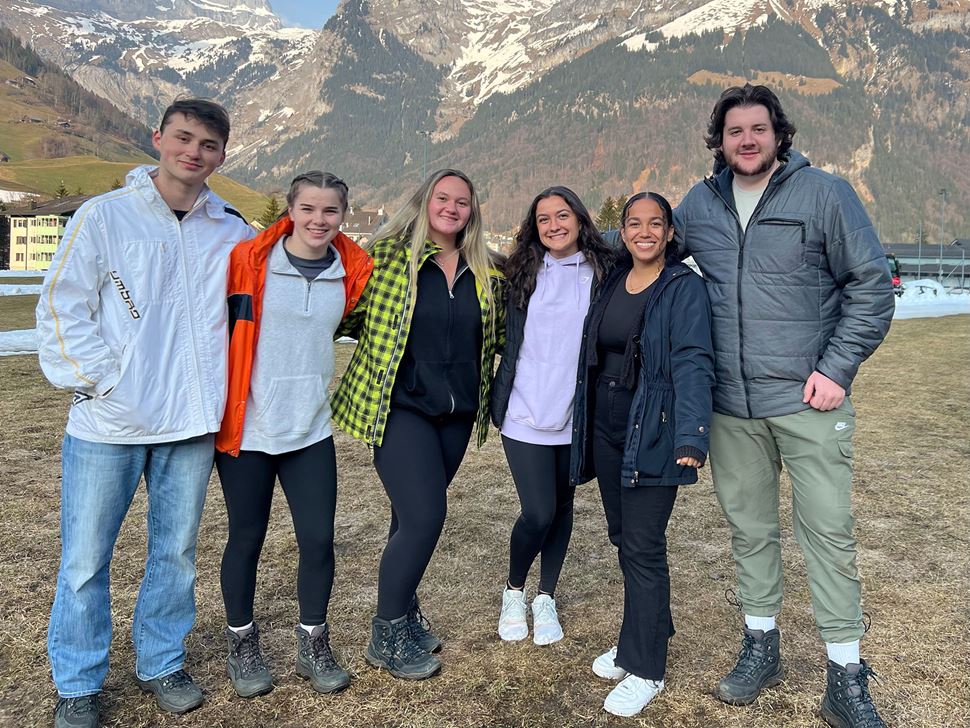 previous next
In Pictures
Right after paragliding. 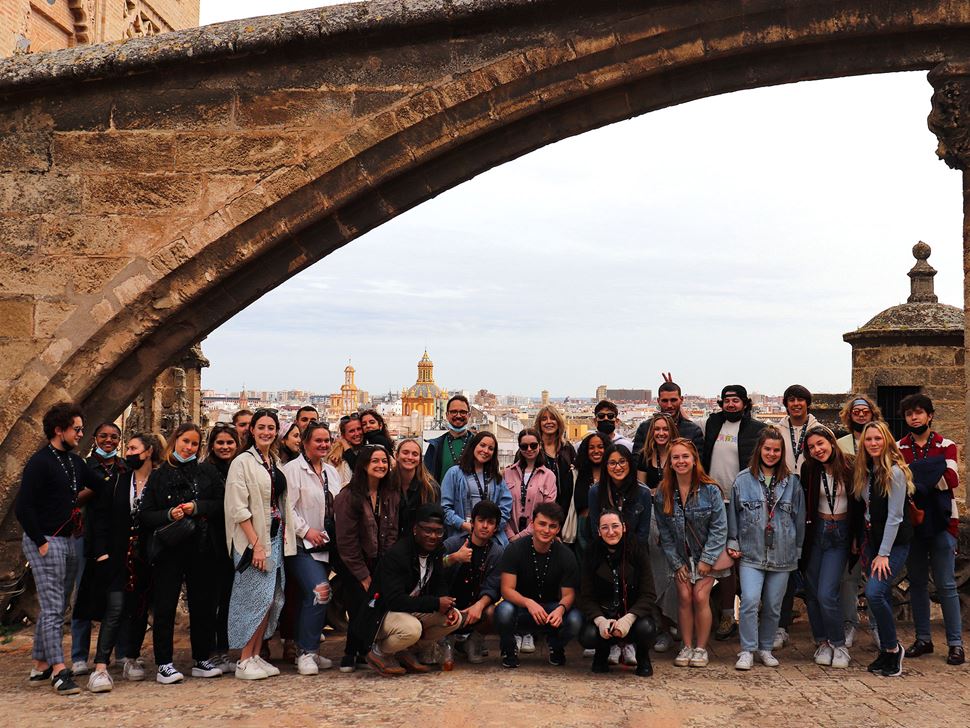 previous next
In Pictures
Battiata on a group trip to Seville, Spain. 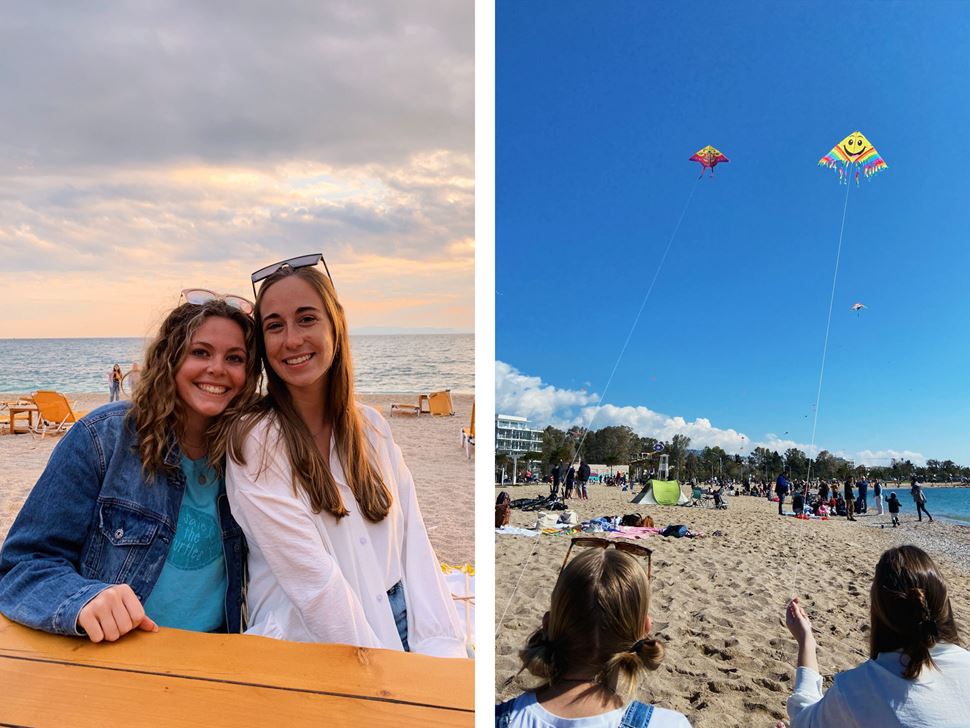 previous next
In Pictures
Amy Phalen pictured at a beach in Athens, Greece, and flying traditional kites on Clean Monday in Athens. 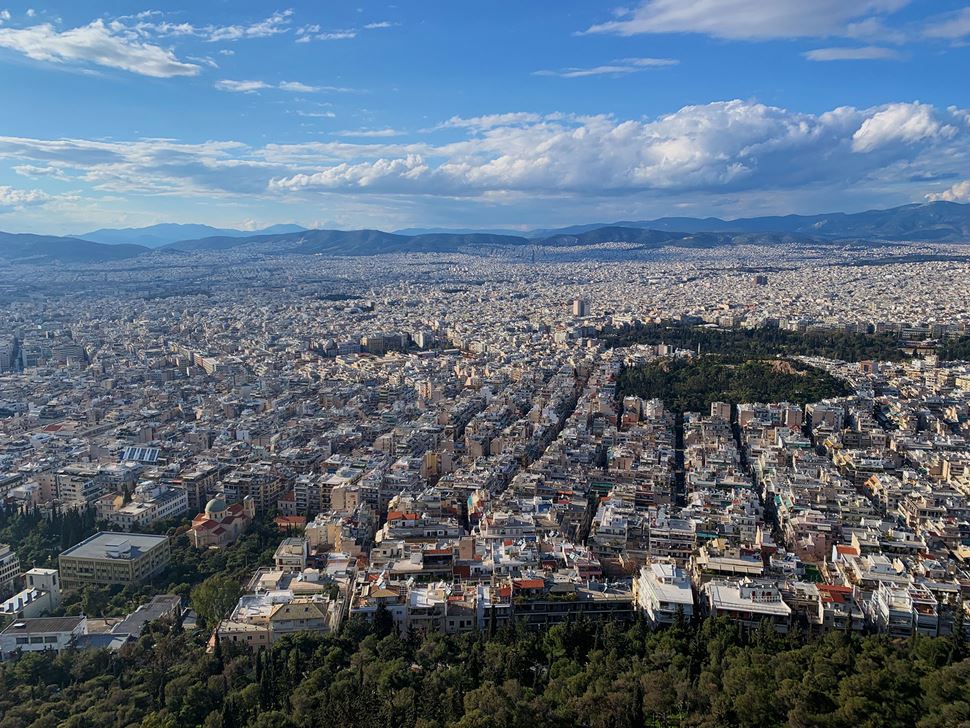 previous next
In Pictures
View of Athens from Mount Lycabettus. Photo by Amy Phalen. 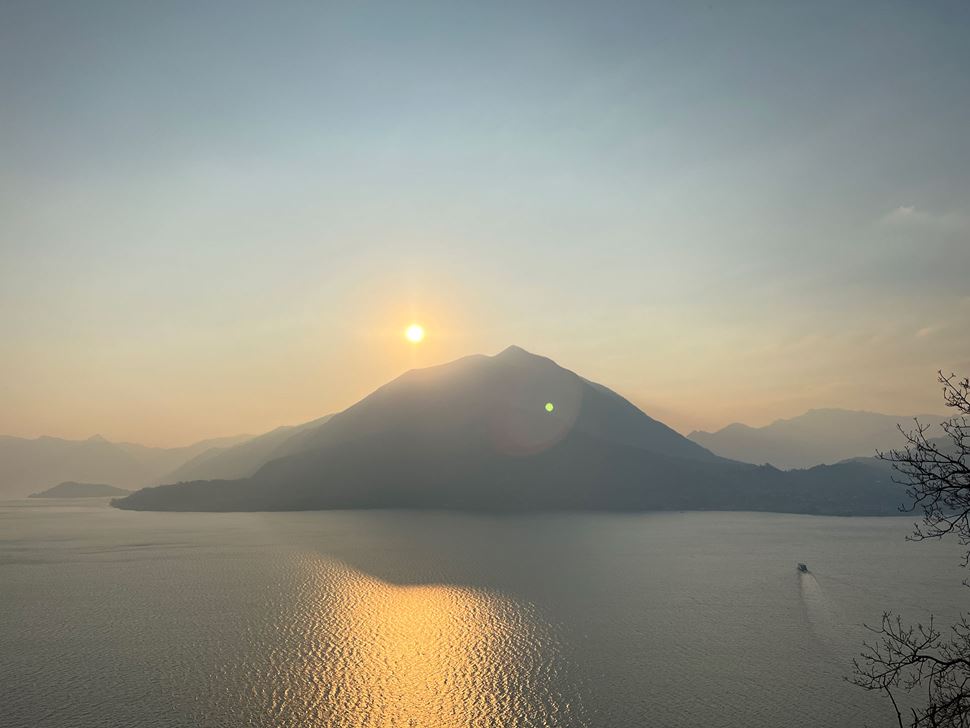 previous next
In Pictures
View of Castello di Vezio in Varenna, Italy. Photo by Caitlin Ryan. 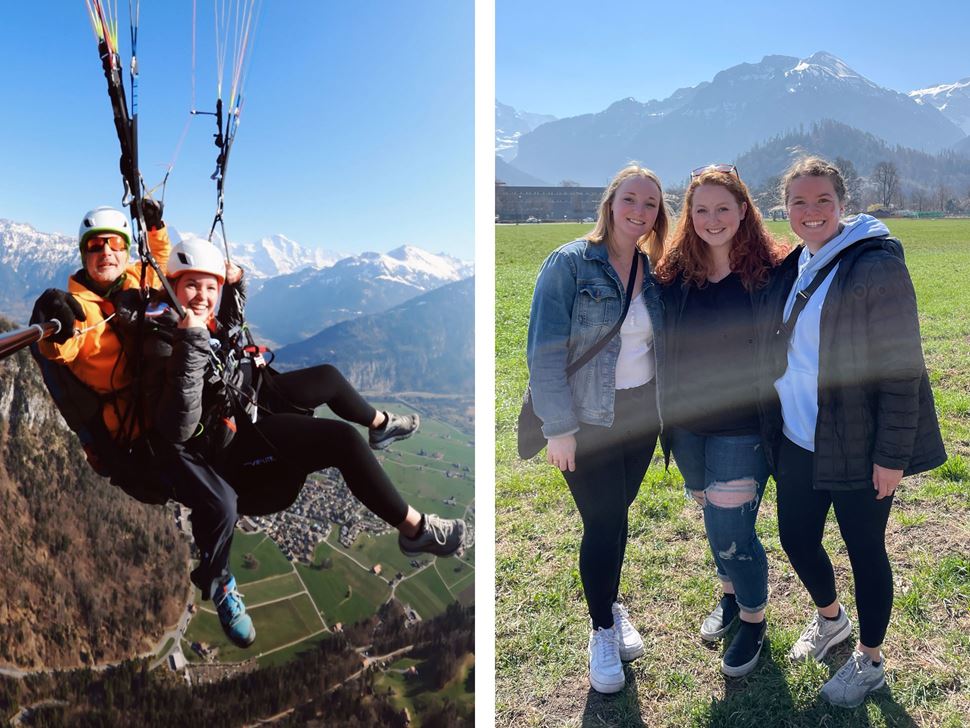 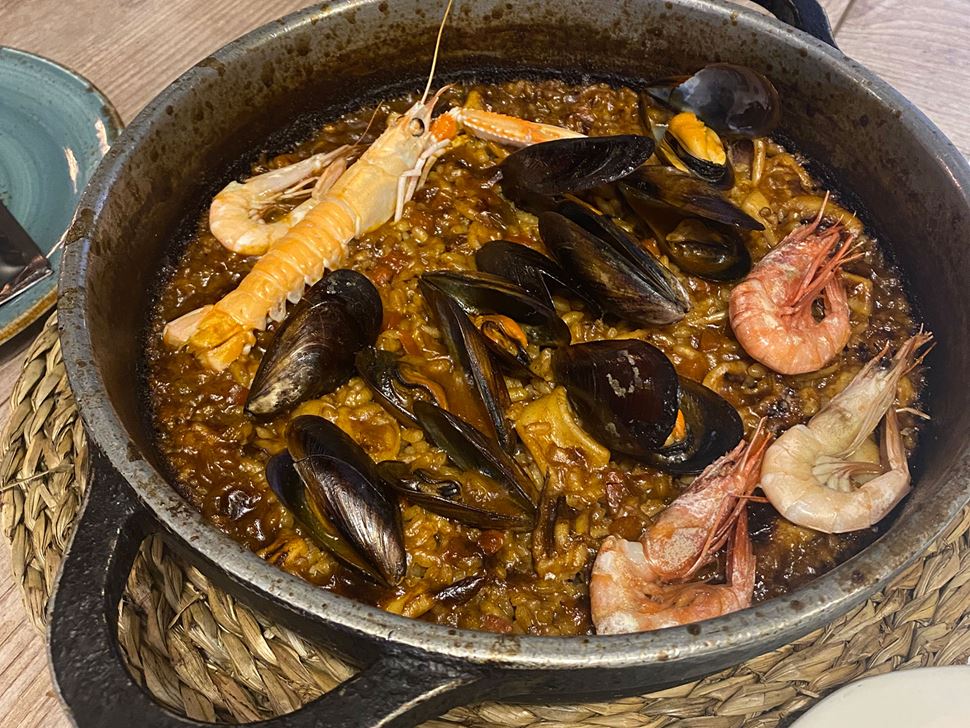 previous next
In Pictures
Paella in Barcelona, Spain. Photo by Caitlyn Sievers. 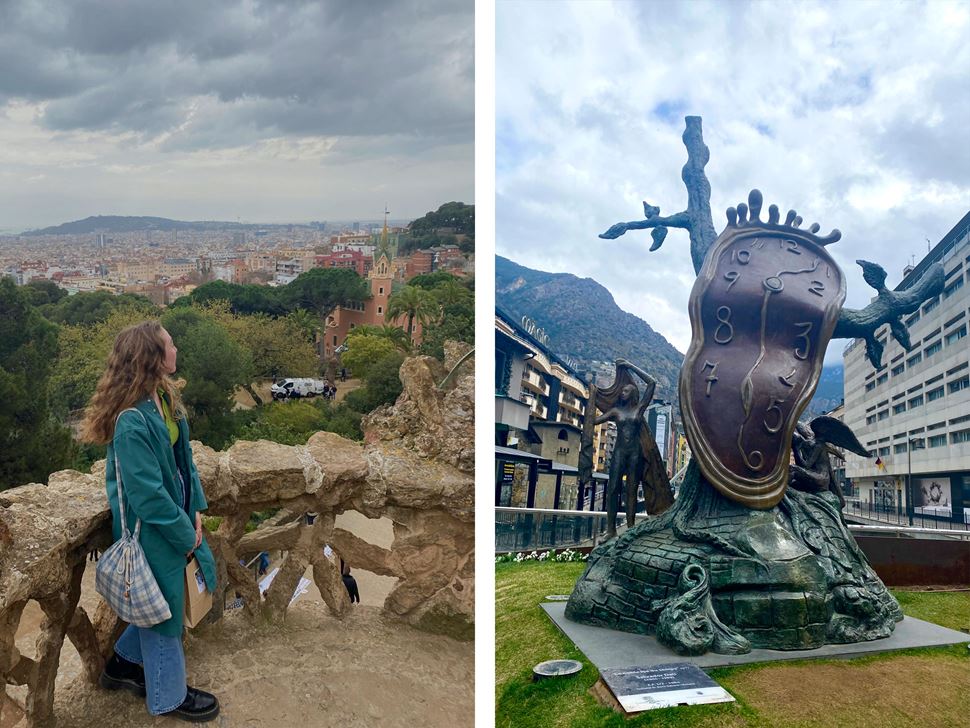 previous next
In Pictures
Caitlyn Sievers scoping the view of Barcelona from Parc Güell and visiting Salvador Dalí’s sculpture “The Nobility of Time” in the Piazza Rotonda of Andorra’s capital city, Andorra la Vella. 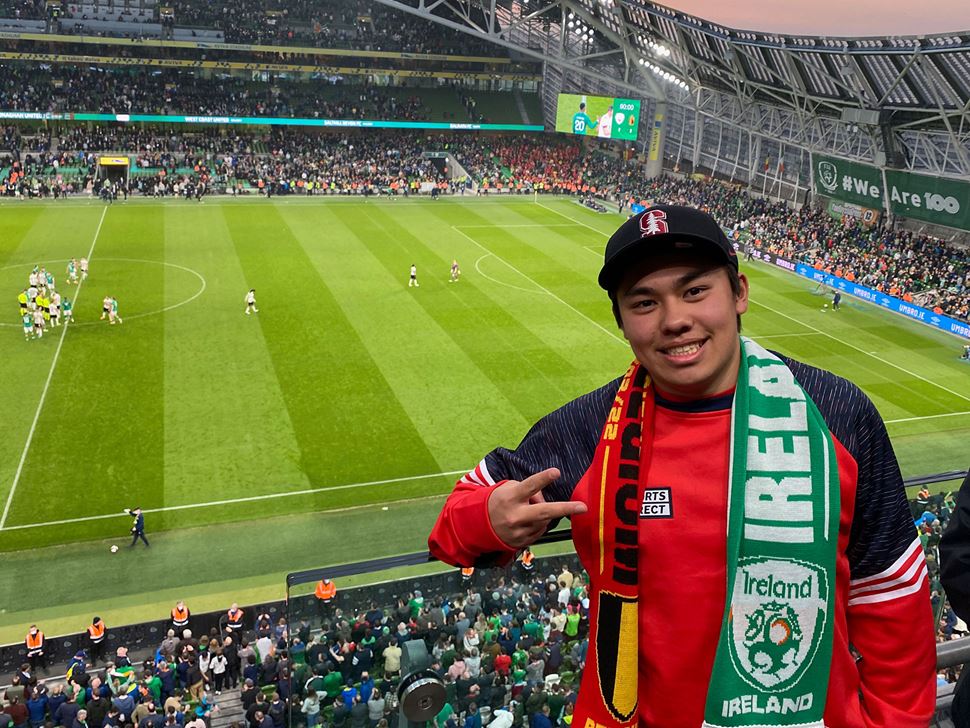 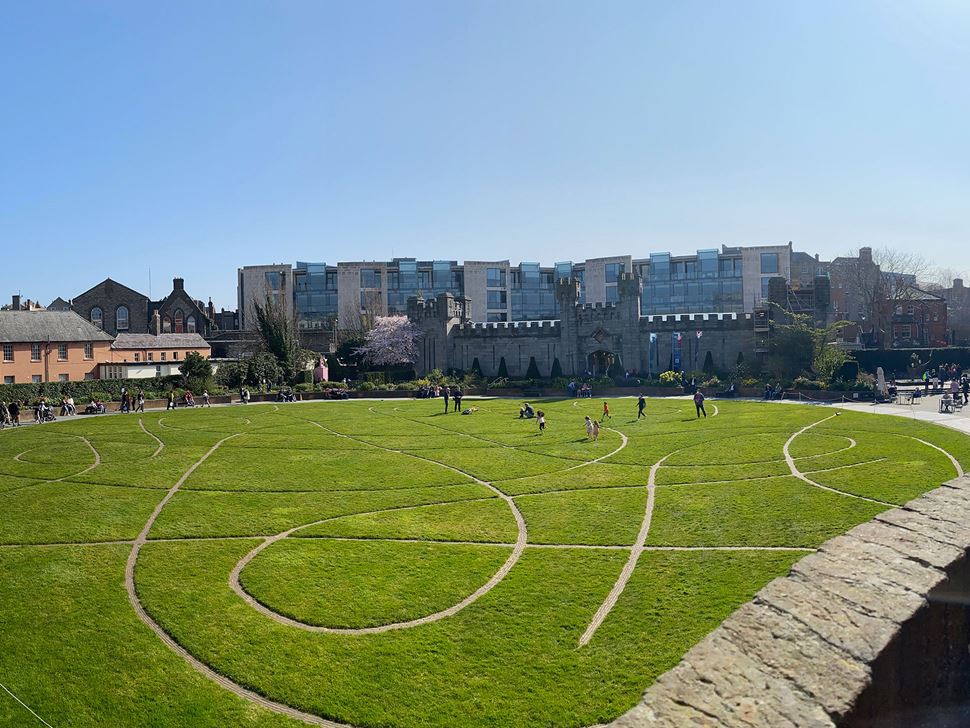 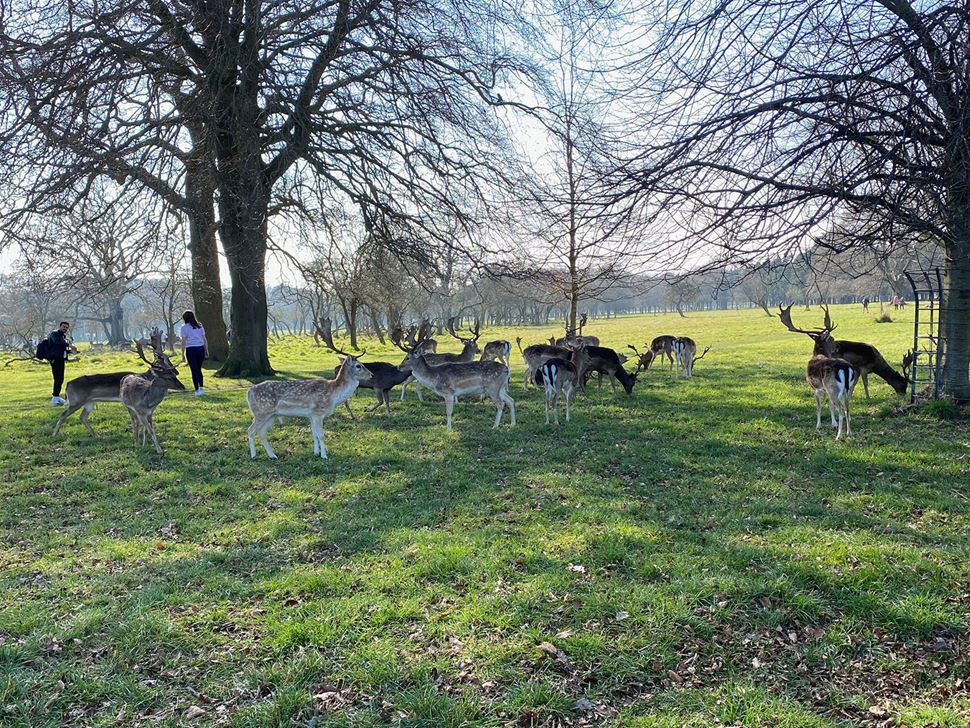 previous next
In Pictures
Phoenix Park’s local residents: wild fallow deer. The park’s original purpose was to serve as a hunting ground for these deer, but today it serves as a national park and is preserved by the Irish government.
Compiled by Sarah Sweeney

This semester, we’re following Endicott students as they embark on transformative study abroad assignments around the globe. Read their first and second dispatches.

In our third installment, we asked our study abroad students to reflect on how they feel a few months into their experience. Has study abroad changed anything for them? Have they picked up the local language or adjusted to cultural differences, if any?

Below, you’ll hear about their extensive travels—Andorra, anyone?—and how everyone, while in different locations, seems to echo the same sentiment: This is, indeed, the time of their lives.

These past few weeks have been filled with so much adventure and traveling! I’m so grateful for the opportunities I’ve been given and the chance to travel the world. The memories I’ve made these last months abroad will stay with me for the rest of my life. I know that when I’m older, I’ll reminisce about my fond memories of being young, carefree, and bold!

Since my last dispatch, I’ve been to many cities and countries in Europe. At the beginning of March, a few friends and I went to the south of Spain and visited two cities, Málaga and Cómpeta. While in Cómpeta we went on a beautiful hike and the scenery was mesmerizing. This ended up being a six-and-a-half-hour hike and I would like to point out that it was my very first time hiking! The view from that altitude looked like it belonged on a National Geographic magazine cover—it was that beautiful.

After, we had our final excursion and visited three different cities in Spain: Cordoba, Seville, and Granada. We spent one day in Córdoba and Seville and two days in Granada. In Córdoba, we went to the Mezquita-Catedral, a mosque built during the time Muslims ruled over Al-Andalus. We visited the mosque during the night and it was beautiful, especially the way it was lit up. In Seville, we went to a flamenco show and I was able to get a front-row seat. It amazes me how much passion the dancers put in and the guitarist carried the show! I can’t wait to see another flamenco performance. In Granada, we visited the Alhambra palace, one of the oldest and most famous monuments of Islamic architecture.

At the end of March, my friends and I went to Lucerne, Switzerland, and went paragliding! It was the most exhilarating and freeing experience of my entire life. Surprisingly, I was not nervous at all—the view of the Swiss Alps was breathtaking from such a high altitude and even beat the view of the mountains in Málaga. We explored the city of Lucerne by walking around, driving around, and going on a boat tour.

I have a few more places booked for April and I cannot wait to share my memories with everyone. Cheers to more traveling and memories with friends!

There was a shift from feeling like a visitor in Prague to feeling like I live here in the last few weeks. I don’t feel the need to have my GPS running everywhere I go—I’ve become a bit of a regular at some restaurants and cafes, and I’ve continued exploring new parts of the city as well. The language is still challenging because it is so different from anything I’ve been exposed to. It’s easier to read signs on the street and in buildings and understand where I’m supposed to go, but conversation beyond the basic “hello, yes please, thank you, goodbye” is nearly impossible.

The most notable cultural difference that I’ve adjusted to is how much slower life is here. In the U.S., people are so anxious about wasting time and constantly rush from one thing to the next. In Prague, people aren’t speed walking down the street. Servers won’t bring you the bill until you ask for it because they don’t want to rush you out of the restaurant. At first, it was honestly a little frustrating to get used to because I’m accustomed to a fast-paced day, but it’s been nice to learn how to relax a bit more.

Without a doubt, the highlight of the past month was all the traveling I was able to do. I took my first solo trip to Budapest, Hungary. It was definitely a learning experience—I didn’t plan much of an itinerary, so I spent a lot of time wandering the city, but it was beautiful and it allowed me to see interesting places that I might not have otherwise sought out.

The next weekend was my birthday, and I met up in Paris with my friend Grace, who is studying in Madrid this semester. Traveling and exploring with a friend was a great change of pace, and it was a relief to be in a place where the language was more familiar to me. We visited the Louvre, spent an afternoon exploring Montmartre, enjoyed a sunset by the Eiffel Tower, and more.

I was also able to take a solo trip to Barcelona and Andorra la Vella. The architecture, food, and energy in Barcelona were incredible, and I was happy to be on the shore again! My favorite place was Parc Güell, which had an amazing view of the city. After two days in Spain, I took a bus to the tiny country of Andorra (smaller than Rhode Island!), sandwiched between France and Spain in the Pyrenees Mountains. I have wanted to visit Andorra since I was a kid, and being there was one of the most exciting and gratifying moments of my experience abroad so far. I went hiking, and taking time away from big cities was a much-needed break for me.

Last weekend, Grace came to visit me in Prague and I loved being able to host her and show her my favorite places around the city. Playing “tour guide” for the weekend cemented the feeling that Prague has become a home-away-from-home for me, and the idea of leaving in under two months is bittersweet.

I’m now looking forward to warmer days in Prague, more solo trips around Europe, and my mom coming to visit!

I can’t believe I have lived in Florence for a month and a half! Although I’ve been able to see so many places, most days, living here doesn’t feel real. Every time I walk up what feels like the never-ending steps to Piazzale Michelangelo, I’m reminded of the true beauty of Florence.

I’ve started to pick up Italian, at least the simple phrases, and I’m becoming more confident in holding conversations in Italian with locals. Some of my favorite places I’ve traveled to in Italy are Venice, Verona, Pisa, and Lake Como, specifically Varenna and Menaggio. This past weekend I traveled to Interlaken, Switzerland, and I had such a great time. Interlaken was absolutely stunning and had breathtaking views everywhere you looked.

On the train to Interlaken, I ran into two of my classmates from Endicott—Kenzie Weldon and Lily Keans—who are studying in Cork, Ireland, this semester! We went paragliding and saw the city from up in the sky, which didn’t feel real. That whole trip felt like a dream, and I miss it so much! Although I’m having such a great time here in Italy, I miss my family, friends, and dogs back home. It can be tough seeing all of them accomplish milestone moments while being across the world from them! That being said, I’m excited to see where the next month takes me, and I couldn’t be prouder of myself for stepping out of my comfort zone on this adventure.

It’s official—I only have two weeks left in my program here in Greece! This is going to be a very bittersweet goodbye. Traveling Europe, while living in Greece for four months, has been one of the best times of my life. Learning your way around a new country and culture with people that become your best friends is an unbeatable experience. Luckily, I have a few more weeks here and I have a few last trips planned. Greece has an extensive and rich history among beautiful destinations, which is something I’ve loved about this study abroad location. It feels like Greece has it all.

I would say that the most surprising thing about study abroad is how normal our lives in Agia Paraskevi feel, even though we are traveling most weekends. I became very used to walking everywhere, getting down to Athens, knowing the good shopping spots, and our favorite bakery on the corner.

I will admit that I’m excited to see my friends and family at home so soon, along with the familiarity of home. Because we didn’t have a spring break, my roommates and I are staying a few extra days to go to Mykonos. I’m excited for one last trip to end this big excursion!

It’s starting to feel different than when I first arrived in Ireland. At first, I thought I had known every nook and cranny of Cork and other parts of Ireland, but I’ve since begun to discover and even rediscover certain parts that I’ve been able to have exhilarating times at—including the Cork sports scene.

I’ve experienced some traditional Irish sports such as Hurling and Gaelic football, and I was fortunate enough to travel to Dublin and experience the capital city in a different light than I had ever experienced before. The landmarks I visited (Dublin Castle, the General Post Office, Kilmainham Gaol, and Phoenix Park, to name a few) and the sports match I saw (Ireland v. Belgium International Friendly) brought me a sense of rejuvenation and fun I thought I had lost when traveling.

When it comes to cultural differences, I’ve begun to get the hang of the local language, which of course is English, but there is a slang term used when you’re having fun—craic, but pronounced like “crack.”

I plan on traveling with a German friend of mine in April and I’m calling it “The Great European Expedition.” It will be over the course of my two-week spring break, and I’ll travel to England to see relatives, then meet my friend in France and travel from there to Belgium, Luxembourg, Switzerland, Lichtenstein, and potentially Iceland.

My time here has served me well in helping me become more independent, responsible (both socially and financially), and expanding my understanding of certain cultures. I hope to bring what I have learned back to Endicott—but, for now, I must get ready for one of my final presentations and then further plan and pack for my trip. Till next time.