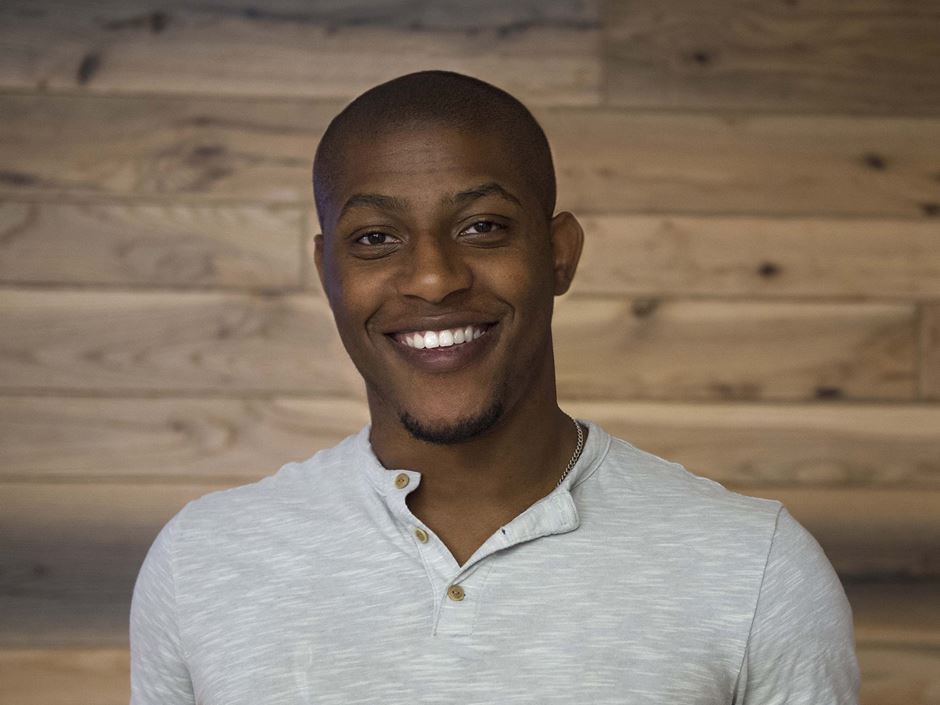 When forging his entrepreneurial career path, double Gull Oscar Moore ’13 M’14 often asks himself “what story do I want to tell my grandchildren?” saying that this question always clears the path for him.

Well, it seems to have worked. Moore, who earned his Bachelor of Science in Criminal Justice, along with a minor in psychology, and an MBA through the Van Loan School of Professional Studies, went on to start and grow his own business, Door of Clubs, that he co-founded with two other Gulls, Adam Rosen and Pranam Lipinski.

Prior to Door of Clubs, the trio started Rising Dreamers, with the mission to help students succeed. This desire led them to a speaking tour that visited several colleges and universities across Massachusetts. The audience at these talks were primarily members of student clubs and organizations. They quickly learned that as club members, these students had two pressing challenges: helping their members connect to job and internship opportunities, and raising sponsorships to fund their club events and initiatives. From there, the three saw an opportunity, and in 2015, Door of Clubs was established. Their new platform launched and quickly began connecting students from collegiate clubs, fraternities, and sororities to job and networking opportunities with some of the best startups and public companies in the world.

“The only limitations you have are self-imposed. Once you learn this, you will get out of your own way and the world will do the same.” - Oscar Moore ’13 M’14

Moore says that his internship experience at TD Athletes Edge and Build it Green! NYC helped him determine the path he wanted to take upon graduating. “Both of these internships were non-traditional for my major. They taught me the value of doing things outside of the box. This, in many ways, led me to pursuing an MBA and ultimately choosing to turn down a corporate job to start my own company.”

Even as an undergrad, Moore took advantage of all that Endicott had to offer, which in turn shaped him to be who he is today. He was a student-athlete on the football team, was actively involved with Endicott’s business and technology accelerator FUEL, started the Networking Club, regularly participated in student-related activities such as the annual “Mr. Endicott” talent show, and worked with the food services company, Sodexo.

Being at Endicott during the birth of the Colin & Erika Angle Center for Entrepreneurship opened Moore’s eyes to the possibility of doing his own thing instead of pursuing a more traditional entry-level job—something he is very glad he did. “I honestly believe, if you decide to start a business because you see a problem that you think you can fix, or you are seeking freedom from the well beaten path, you really can’t fail,” says Moore. He cautions that entrepreneurs do need to be prepared mentally for the adversity that comes with trying to build something from scratch in a world that has been trained to expect instant results. Moore says that there are many positives to starting your own company: “Starting a business forces you to learn about who you truly are and what you really value. You are forced to break through limitations that you may have thought you couldn’t previously. You also get to learn about the world from a completely different perspective—one of creation versus consumption.”

Moore credits finding his way into his current role to his Endicott education and the relationships he built with professors Dierdre Sartorelli, David Bader, and Walt Pavlo, coupled with meeting his future wife (whose father was a successful entrepreneur), and even the networking exposure his catering experience through Sodexo provided. “I had the opportunity to cater events at [former President Dr. Richard Wylie’s] house. During these events, there would be all different types of people who had reached a certain stature in life. I would find ways to drum up conversations with them, which lead to new learnings and opportunities.”

When asked what he would be doing if he hadn’t started Door of Clubs, Moore says, “In an alternate universe I can’t see myself doing anything different. Everything tells me that I would have found my way into entrepreneurship somehow.” Entrepreneurialism has given Moore the outlet to be himself without any limitations—meeting his desire to be free. He says that his short-term career goal is to continue making progress on his long-term goals. Moore’s long-term career goals? To continue working for, creating, and investing in companies who create products that people love. He shares, “The only limitations you have are self-imposed. Once you learn this, you will get out of your own way and the world will do the same.”

Since graduating, Moore has made it a point to stay connected to the Center for Entrepreneurship and lend a helping hand whenever he can, including returning to the Nest to speak to groups of students about entrepreneurship, joining the Center’s Board of Advisors, and also mentoring the first group of Endicott students to have their semester-long internship be spent building their own business—A.J. Marinek ’19 and Cam Bleck ’19 of CropShop. He also participated in Endicott’s Gull2Gull Mentoring Program where he mentored undergraduate students and helped them make progress toward achieving their career aspirations.

To learn more about entrepreneurship at Endicott, visit endicott.edu.

An Unstoppable Force on, off the Water
Homebrewed Success
Blogging Her Way to Success