Endicott has produced quite a group of innovative alumni brewers operating in both Massachusetts and Maine. 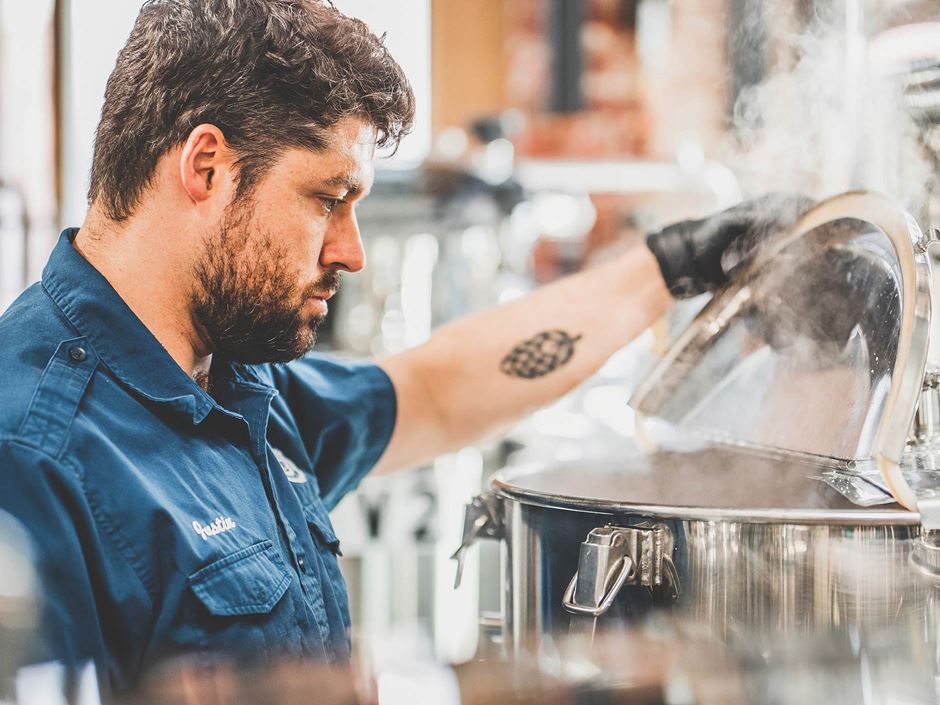 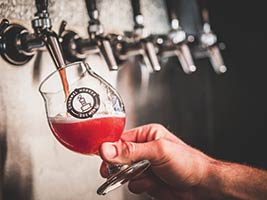 Gulls are great at finding ways to stay together and keep innovating, even after they’ve graduated. In fact, it might surprise some people to know that the College has produced quite a group of lauded brewers! Whether they craft IPA, stouts, lagers, or sours, they do it with style.

In 2020, Endicott hosted an alumni breweries virtual roundtable during Virtual Homecoming that featured Justin Negrotti ’09 and Jake Crandell ’11 of Channel Marker Brewing, Anthony Martignetti ’13 of Faces Brewing Co., and Mike Snowdale ’07 of Stellwagen Beer Company, all of which are based in Massachusetts, as well as Parker Olen ’08 of Mast Landing Brewing Company in Maine.

To continue the momentum of that successful event, we interviewed Negrotti and Martignetti, who have had very different paths to similar destinations, to bring their stories to Soundings.

Like many beer enthusiasts turned successful brewers, Negrotti started small. He brewed his first beer in his Ryal Side garage in Beverly, Mass. with his partners Tim Corcoran and Jake Crandell ’11.

“We started brewing out of my garage about five years ago. It’s a classic story of a love for traveling around New England, visiting breweries and taprooms and trying out craft beers that struck a chord,” said Negrotti. “I have always wanted to create something of my own and visiting all these breweries lit the fire, so to speak. Once I commit to invest my time and effort into something, I tend to go 100%. I pitched my wife Cortney (a 2010 Endicott grad) on investing a bit of money into a homebrew setup and that jump-started me onto the path of brewing. From there, I read every book I could get my hands on, joined a local homebrew club, and started talking to as many commercial brewers as possible!” 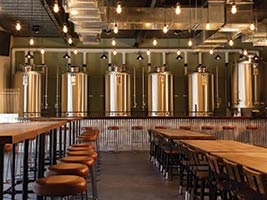 Martignetti, on the other hand, is not a brewer himself, but leverages his background in hospitality and management to support local brewers. “After graduating from Endicott in 2013, I bartended for a few years, and transitioned into managing a large bar and bowling alley in Cambridge, Mass.,” he says. “During the mid-2010s, the craft beer scene in New England exploded. We took our customers, who were drinking mostly PBR, Budweiser, or Sam Adams, and converted them into drinkers of the latest microbrews.”

After making that decision together, Faces Brewing Co. opened in Malden, Mass., at the end of May 2020. “Our first four brews were our cream ale, Commander; our Irish stout, Modern Age; a New England IPA, Progression; and our blonde stout, Coffee Ferrari. So, our cream ale was our first ‘official’ brew,” says Martignetti. “Prior to that, we’d brewed test batches on a pilot system that we brought to a few beer festivals in advance of opening.”He continues: “I was interested in all these new breweries who were pushing the envelope and had so many unique qualities that I wasn’t used to seeing in a beer. When my partners and I decided to move on from the bowling alley, opening our own brewery seemed like a logical next venture and something we could really sink our teeth into.”

The desire to deliver unique flavors is consistent between the two different businesses; each strives for a new beer-based experience. 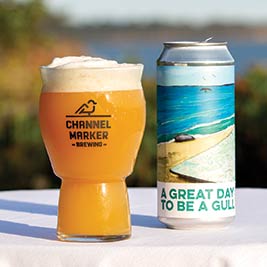 Channel Marker specializes in New England-style ales (pale ales, IPAs, and double IPAs) and fruited sours, but each of those is subject to experimentation for even more differentiation. Negrotti explains: “We really enjoy tinkering with our brewing water which is sourced from Wenham Lake (Beverly's municipal water supply), fed by the Ipswich River. Different water profiles have a meaningful impact on sensory aspects of the finished beer like mouthfeel, color, taste, and aroma. Alongside that, we love to experiment with different fruit and adjunct combinations with our fruited sour programs.”

“Tim, Jake, and I will never be satisfied with the beer we brew, which is an attribute we find holds true with the breweries we respect and aspire to be. Building something from the ground up, by hand, with my best friends has been an incredible experience.” —Justin Negrotti ’09, Channel Marker Brewing

Faces Brewing Co. ensures that anything they feel comfortable serving is a product that has been well-executed. “We pride ourselves on offering a wide variety of styles, so ‘specialty’ can have a different meaning to different people,” says Martignetti. “Personally, I think our lagers are executed really, really well. Our sours are well-balanced, and our Coffee Ferrari blonde stout is a unique style that’s light-bodied but packed with flavor and a high ABV.”

Of course, there has to be a top choice and, according to Martignetti, it is called Progression. “It was the first New England IPA we released, and it is still our most popular beer on draft. IPAs have massive popularity among craft beer enthusiasts in New England, and that popularity doesn’t seem to be waning any time soon. Progression is juicy, citrus-forward, and comes in at 7% ABV,” he says.

Negrotti echoes Martignetti in his belief of producing the highest quality product: “We have several feedback systems in place that we monitor in real-time, coupled with having direct conversations with our customers when they visit the taproom. We firmly believe that those breweries who continuously execute brewing exceptional beer, each and every batch, will command attention from the highly competitive market.”

Applying the Endicott Experience to Entrepreneurship

Without a doubt, personal drive, a love of the industry, and an entrepreneurial spirit are strong drivers for brewery success. But you might be surprised to learn that bringing in lessons from classes and extracurricular activities at Endicott have also been a huge factor.

Negrotti says, “When you start up in an industry with zero commercial operating experience, you tend to fall back on your strengths to guide the process. For me, graduating from Endicott with a degree in business and a concentration in finance meant focusing our efforts on developing a rock-solid business plan, operating agreement, and a realistic financial forecast. We spent a great deal of time talking to other small breweries and constructing a financial forecast that, along with our business plan, we tried to put in front of over 40 different banks before we found one who was willing to listen. That bank was, at the time, Beverly Cooperative, now North Shore Bank. Without my undergraduate degree from Endicott and gaining that solid foundational knowledge of financial modeling and business planning, there is no way we would have had the opportunity to secure the capital we needed to get our project off the ground.”

Martignetti also ties his success back to Endicott, but in multiple ways. He says, “What helped me most from my Endicott experience was the internship program. Networking is the most important aspect, especially in my case starting a new business. I reached out to everyone I knew that had either started a business or worked in a brewery or restaurant. The lessons and information I learned from all the people I reached out to along the way have been invaluable. Endicott did a tremendous job through the internship program to show how important networking can be, especially with the strong alumni connections that we were able to utilize over our four years.”

He also says that athletics was part of how he identified strengths in his team. He says, “A lot of my time at Endicott was focused around playing lacrosse and, I think, playing on a team prepared me well for running a business. In any team sport, you learn pretty quickly that no player is perfect. Everyone has flaws, so developing strategies to shield a teammate’s flaw from showing and strategies that cater to teammates’ strengths is key.”

Martignetti continues, “As one of the partners at Faces Brewing Co., I identified the unique attributes that I could bring to the table that others might not. Likewise, I recognized skillsets in others at Faces that made them better suited to certain responsibilities than I.”

“Every part of forming your own business from an idea to a reality is satisfying. It can be stressful and it takes a lot of long hours, but it’s exciting to go to work every day and continue growing the brewery." —Anthony Martignetti ’13, Faces Brewing Co.

Get Out There & Make it Happen

So what do aspiring brewers need to do to make that dream a reality? Get out there and do the work. Negrotti says, “Get yourself involved in the industry as early as possible. Join a quality homebrew club and brew as often as you can. Take detailed notes and always be looking to improve. Be a sponge!

Martignetti adds, “If you are homebrewing and planning to open your own brewery, reach out to smaller breweries in your area to build relationships with people who have gone through this process already. There’s a lot that goes into opening a brewery, and it is helpful to lean on others every so often when you run into a roadblock.”

What’s next after starting your brewing business? Let us know, of course, so we can add you to the impressive list of Endicott alumni who are brewing their own success.

Success in brewing isn’t limited to beer—another Endicott grad is entering the world of brewing with a cider business. To help make his idea a reality, Fifth Year MBA student Cameron Giroux M’21 (left) entered the EC Fuel Spark Tank competition of 2020 and won first place. The project was funded from that win and he hopes to have his first saleable run of cider ready in about six months. 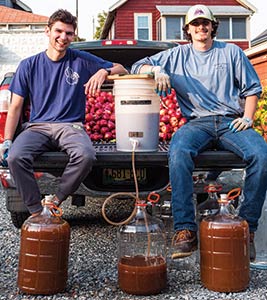 Giroux began brewing during graduate school. He says, “My first cider was brewed during a year of grad school which was also during quarantine. My old college roommate and I had moved to the same city and wanted to try a new hobby.” Cider was an ideal area of focus for Giroux, who happened to have a connection to apples already—his family’s orchard.

He explains, “I have been involved in my family’s apple orchard since a young age and decided to use the bad apples in a way that was better than throwing them out.” For Giroux, using “bad apples” to make something with value is extremely satisfying.

The launch hasn’t happened just yet, but Giroux encourages interested people to follow his family’s Chazy’s Orchard page on Facebook for updates. Cheers to an award-winning idea!

Breaking Through Barriers
Growing up Montessori
Blogging Her Way to Success