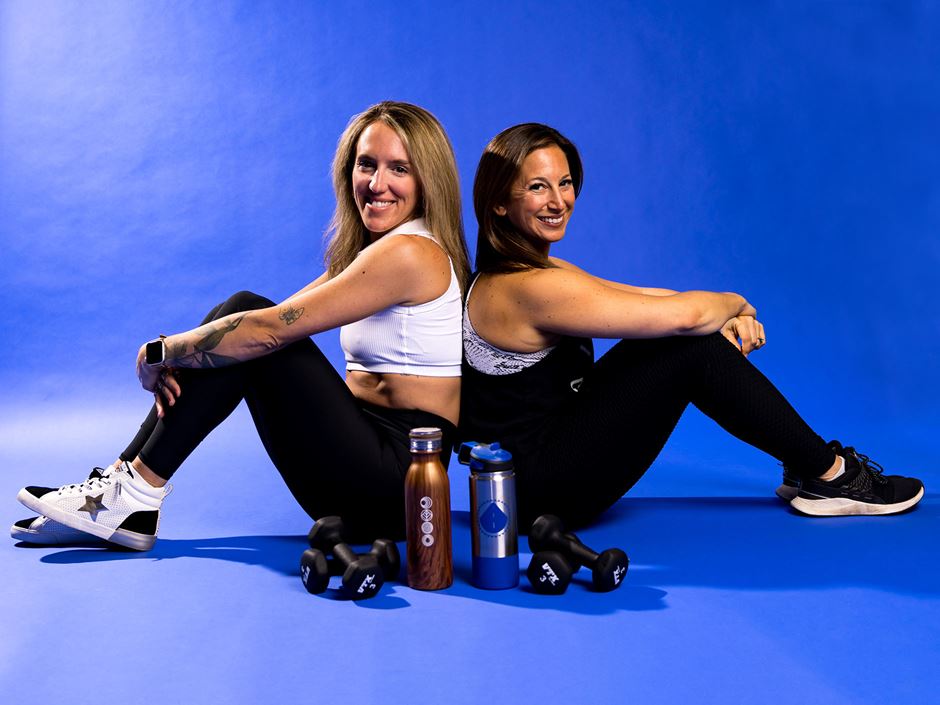 “I’m just rolling with it,” shrugs Emily Skoniecki ’04 gesturing to the ladder, earsplitting drilling, and rows of empty stationary bikes behind her at The Inner Cycle’s newest indoor cycling studio opening soon in Salem, Mass.

Skoniecki’s best friend since 9th grade (and co-owner of The Inner Cycle for nearly a decade) Hillary Mandelbaum zips by in leggings, wielding a hammer that she soon takes to a wall.

“We’re not afraid to DIY our builds,” explains Skoniecki, who has constructed the duo’s wellness empire of four studios that now dot the North Shore.

The Inner Cycle’s North Reading location shares a building with The Energy Barre, a fitness and yoga studio founded by another Endicott alumna, CEO Julianna Curtis ’08. Together, these two woman-led, alumni-owned businesses are disrupting the fitness scene on the North Shore by imagining inclusive communities for improving wellbeing, peace of mind, and physical strength.

Curtis has the perfect soothing and velvety voice for a yoga instructor (even while expertly wrangling her adorably wiggly three-year-old son). Her live stream, downloadable lessons, and in-person classes at four Energy Barre locations are inviting and grounding.

And while the fitness routines offered in infrared-heated studios are quite challenging, the message is about loving and strengthening the body rather than aspiring for a distorted, Instagram-like skinny.

While both Skoniecki and Curtis lead thriving businesses—and share one joint location—they didn’t know each other at Endicott. But the College helped both find the confidence to follow these unexpected paths.

Growing up in Beverly, Skoniecki always admired the beauty of the Endicott campus and it just felt right to join the Nest. 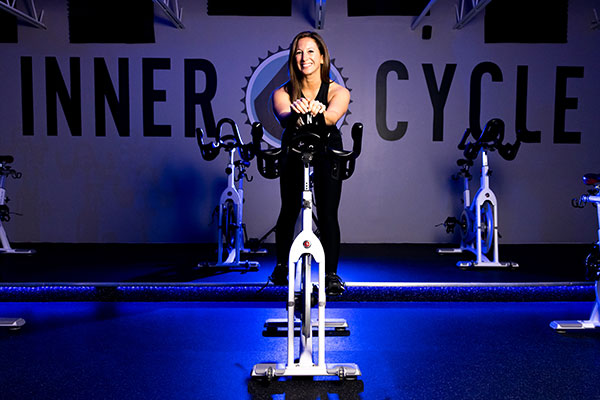 “It’s almost like an alter ego when you get up there,” said Emily Skoniecki ’04“I’m a small-town girl so I liked the small classes. I worked well in that environment, and I got to know all my professors and gained confidence both in public speaking and asking for help from others,” she says.

With a B.S. in Human Services, Skoniecki broke into the corporate world and thrived as an operations executive and recruiter for nearly a decade.

“They were wonderful jobs working with awesome female bosses who inspired me a lot,” she says. “But even so, I was sitting all day.”

She and Mandelbaum took up spinning to cure their cubicle fever, never expecting that it would shift their speed permanently.

Skoniecki joyfully reconnected with the pent-up part of herself that had loved team sports as a kid whenever she rode. She became an instructor to help others do the same.

“It’s almost like an alter ego when you get up there,” she says, referencing the hip-hop she gravitates toward despite her folk music personality. “It’s empowering—and you live the rest of your day out feeling that energy.”

She and Mandelbaum were completely addicted but the only spin studio within the duo’s distance was in Wellesley—a 30-mile hike. They debuted their first studio space in Beverly purely as a hobby. Maybe I’ll make a little bit of money, but really this is just going to be a fun passion project for the community, she remembers thinking.

She was wrong. When The Inner Cycle opened its doors in 2011, both women were heavily pregnant yet teaching, and the place was packed with locals. Within three years, they left their day jobs in the dust, logging tens of thousands of miles and launching a second studio in Amesbury.

From there, the business grew organically. “We’re not millionaires, but we’re really happy,” Skoniecki says.

But what truly moves her is when after someone approaches her in tears after a ride because they now have the energy to keep up with their kids or have the perspective to handle life’s challenges.

Sweat has also always been Curtis’s strategy for facing obstacles.

“Since I was a young kid, I’d go for a run if I felt stressed, sad, or anxious,” she remembers.

Growing up in Danvers, Mass., her family called her a “bossy girl,” which wasn’t a putdown, but her parents’ way to celebrate Curtis’s innate leadership abilities. 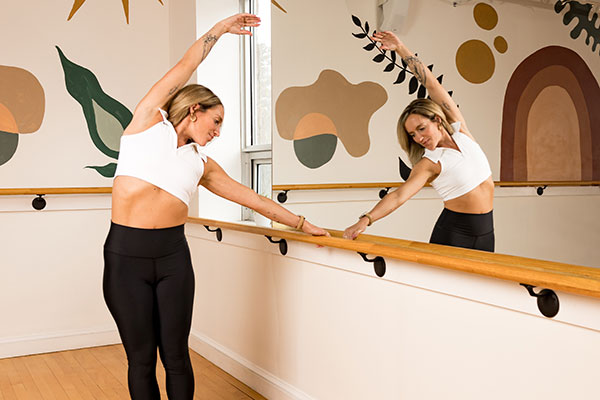 “I love to be physical, to help people, and to be able to share my personality,” said Julianna Curtis ’08She chose Endicott because it was close to home and enabled her to work nights and weekends at a nearby salon while studying hospitality management.

“I’ll never forget the incredible feeling of finishing class and going and sitting with my books on the beach with 80 other kids,” she recalls.

But after graduation, her excitement waned as she grappled with feelings of inadequacy in a sales job selling blocks of rooms at a hotel. Her heart just wasn’t in it. After watching Law & Order re-runs too many nights, Curtis’s mother persuaded her to try a barre class.

A lightbulb went off with her first ballerina squat. Soon, Curtis was training to become a teacher.

“I started teaching and I was lit up. I love to be physical, to help people, and to be able to share my personality,” she says.

After years of teaching on the side, a friend generously loaned a rent-free space for three months so Curtis could launch her own studio with low overhead in 2012. It was the boost she needed to open her first Energy Barre location in Stoneham ten months later.

Her husband, John, balances her with “the strongest form of support,” and is her business partner and father to their two boys. They document it all on their candid podcast, With Good Energy.

Curtis currently owns four spaces that also offer yoga classes to thousands of North Shore residents including many Endicott students and alumni. And at the end of a long day, as she closes her eyes, her mind inevitably fixates on how to make The Energy Barre even more valuable to the community.

“I want to support people in seeing consistent growth, development, and achievement while also honoring exactly who they are at the same time,” she says.

For both Curtis and Skoniecki, the North Shore is the right place for growing both personally and professionally, one deep breath, squat, or pedal at a time.