Members of the Class of 1972 talk Endicott of the past—and giving back to shape its future. 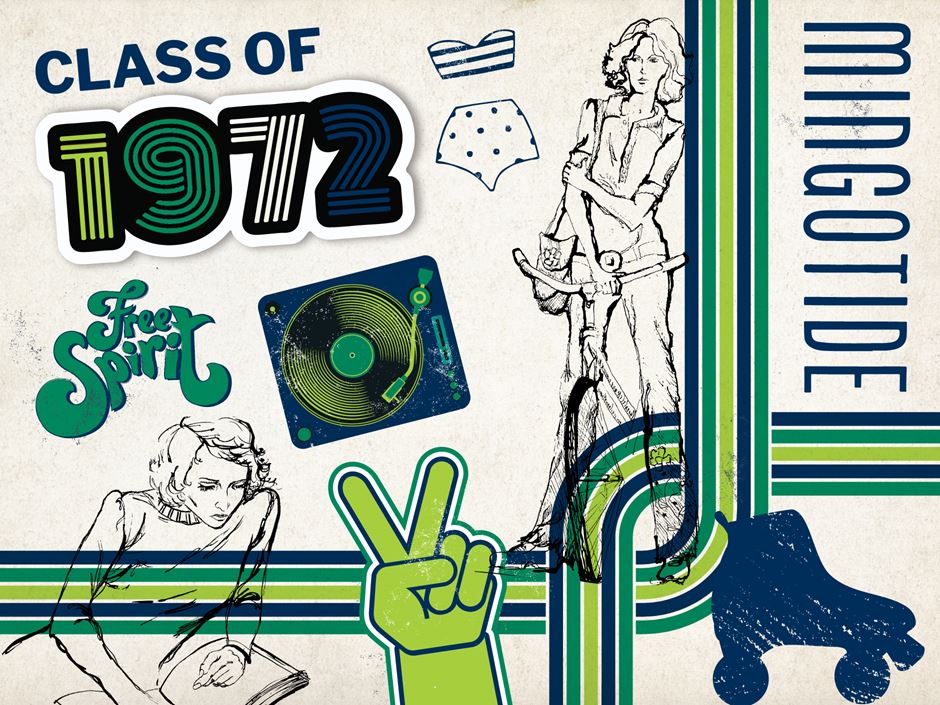 In the summer of ’69, Mary Flatley was a teenager driving down Route 127 when she saw Endicott College for the first time.

“I thought, ‘Oh, my god, this is so gorgeous, on the water,’” she remembered.

She was working as a “mother’s helper” for a Swampscott family and that afternoon they were on the way to a Rockport art gallery. Growing up in Rutland, Vt., Flatley was raised a Red Sox fan, always relishing the occasional family trip into Boston. Passing by Endicott, she sensed the perfect blend of Rutland’s small-town vibe and the allure of the big city, just a train ride away.

“To me, it was geographic,” Flatley said of her instant Endicott infatuation. “I don’t think that, 50 years ago, I’d given too much thought about what I’d do after Endicott.”

But times have changed, indeed.

When Flatley matriculated to Endicott in the fall of 1970, it was a very different world for women. Endicott was a two-year women’s school, Richard Nixon was president, the Vietnam War was underway, and Title IX and the Women’s Educational Equity Act were a few years off.

But going to college is a magical moment in a young person’s life. While Flatley would eventually go on to complete a bachelor’s degree by taking night classes at the University of Connecticut, Endicott remains forever in her heart as the place where she first broke out into the world on her own.

That’s one of the reasons why, on the eve of her 50th class reunion, Flatley joined five other Class of 1972 alumnae—Candi Covino Aversenti, Dr. Katie Barnes, Susan Dowling, Mary Grassi, and Ayune Michel—to sponsor the Big Giving Day Challenge in March.

Inspired by the College’s commitment to continue investing in the power of place, innovative culture, transformational learning, and strength of story in the 2020 Strategic Plan, they were eager to add their chapter to Endicott’s growing narrative, while raising $65,000 to support key priorities in academics, athletics, student life, and the Annual Fund.

Many of these alumnae continue to play important roles at the College, including Dowling, current Alumni Council President and Trustee; Michel, a current Trustee; Aversenti, a former Trustee; and Barnes, who served as interim president before President Steven R. DiSalvo’s 2019 inauguration.

It’s also fitting that, as a one-time women’s college, women continue to steward Endicott’s continued growth and evolution—from Melissa Hempstead ’69, who pledged $6 million to the College in the fall of 2021, to this year’s record-breaking Giving Day success, thanks in large part to the Class of 1972.

“Men get all the credit in this world,” said Barnes. “For me, it’s about the importance of a woman to have a legacy.” 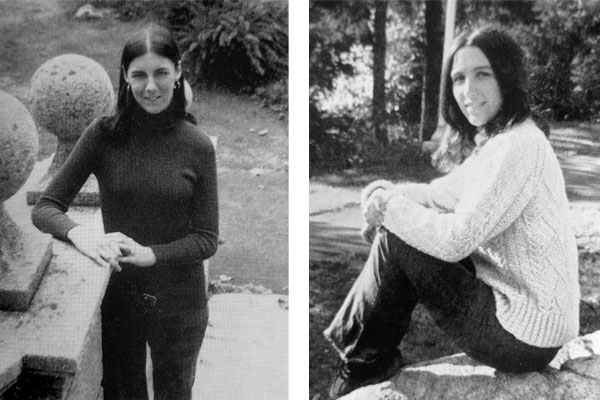 Barnes grew up in Old Saybrook, Conn., dreaming of going to New York City for college—an idea that was quickly squashed by her father.

“My cousins had gone to Endicott and that’s how I ended up here,” she recalled. “Plus, a few others from my high school went to Endicott, and, ironically, we all lived in East Hall on the same floor.” (East Hall is now known as Brindle Hall.)

While at Endicott, Barnes crossed paths with Dowling, who commuted from Natick, Mass., during her first year. Commuters were known colloquially as “Daisy-cotters.”

“I was somewhat of a pioneer in my family. No one had gone to college before me,” said Dowling. Her family had limited resources, and Dowling received a grant from Endicott, which was a big deal to her—then and now.

“Endicott believed in me, and I believe in Endicott,” she said. “It was super helpful because it was, at the time, a lot of money.”

Over the years, Dowling kept in touch with Endicott and never lost an affinity for the College and its role in launching her career—first, in various administrative roles before entering the financial services industry, earning a graduate degree, and her Certified Financial Planner® certification. When it came time to give back to Endicott in a meaningful way, it was a no-brainer.

“I just always had a good feeling about my time here,” she said.

Reelin’ In the Years

Fifty years ago, life for women on Endicott’s campus was radically different. While the women’s liberation movement was well underway, the social and cultural norms for women were still quite rigid. Can you imagine curfews at present-day Endicott?

But, back then, all students were required to be indoors by 11 p.m., unless written permission was granted. (Even then, there were three tiers of permission.) Residence halls were staffed with “house mothers,” often widows or grandmothers in their 60s or 70s who baked and enforced curfew, alongside a troupe of roving “Pinkerton guards” from the Pinkerton National Detective Agency.

After 11 p.m., “they’d lock the doors. So, if you were out past curfew, you needed to have a friend who would open up the window to get you in,” said Barnes. “We found ways to break the rules—it was the ’70s, after all.”

On the weekends, students attended “mixers” with men from neighboring schools—and they went to the beach, of course.

“We went with our album covers and you slid them open and put foil to reflect the sun off your face,” said Dowling. “You didn’t worry about skin cancer back then.”

While internships were always the hallmark of an Endicott education—“they helped me ‘try on’ some possible career paths,” said Aversenti, “and proved to eliminate a few things I thought I wanted to do and I think that was invaluable”—many students also had on-campus jobs. 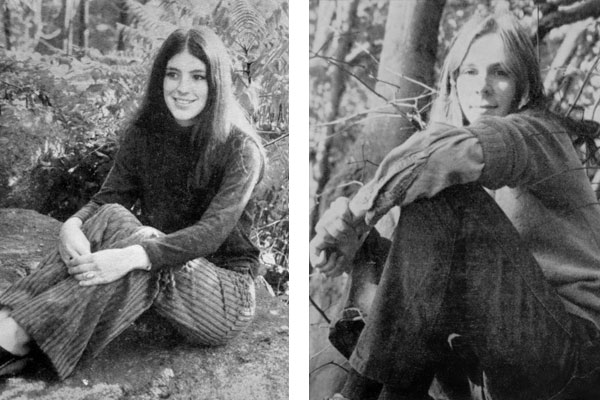 Flatley worked in the cafeteria, then resumed her post as a mother’s helper for a Manchester-by-the-Sea family, while Grassi worked in the library, “which I loved because it was quiet and I could sit down and study while putting away books,” she remembered. “And I was always chased up the steps of the library by the geese.”

Growing up in upstate New York, Grassi remembers being “really disappointed I couldn’t go to Woodstock.” But she could go to Endicott, a school she learned about from a classmate and saw for the first time on a brochure.

“I can honestly say at that point in my life I didn’t know what I was going to do,” said Grassi. “My family believed in education, and I was raised by a single mom who was a teacher. I knew not going to college wasn’t an option.”

While life at Endicott was seemingly idyllic, it was a turbulent time in American history. Many students had brothers who were fighting in Vietnam, and some of those young men died.

Flatley’s internship at Endicott was with American Red Cross. “A lot of our work was because of the war,” she said. “If something happened to a family, if we could get the young service person home, we would—whether it be for a funeral or illness or whatever.”

By late May of 1972, the Watergate break-ins were taking place, the number one song on the radio was “I’ll Take You There” by the Staple Singers, and graduation was in full swing.

These alumnae all left to pursue careers and eventually four-year degrees and beyond, but they all watched their alma mater evolve over the years—transitioning from a two-year school to a four-year school, then into a co-ed institution offering graduate degrees, all while building an athletic program from scratch.

For Michel, Endicott provided her with a second chance, noting that she went from a self-described “party gal” to pursuing the advanced nursing degree that helped her rise to the top of her field before retiring. “Students should obtain all the education and job experiences they can,” she said.

But as much as Endicott has changed, some things have stayed the same. “I’m so glad the gorgeous old residence halls and mansions have been lovingly preserved,” said Aversenti. “And the breathtaking shoreline view remains the same.” 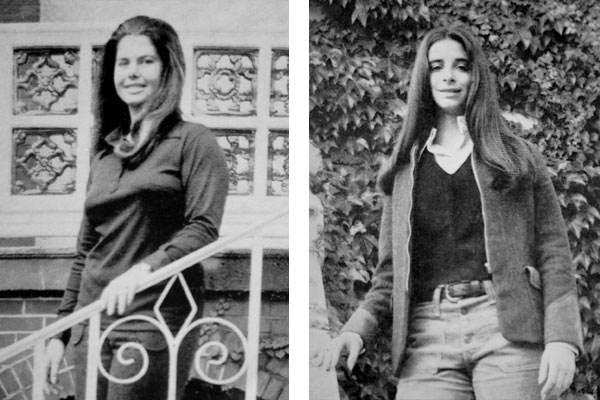 As their 50th reunion nears, many plan on returning to Endicott, though only Barnes remains close by, in Beverly.

“It’s a cliché, but there is a special sauce, something in the air about Endicott,” she said. “I’ve walked across several campuses, but I think it’s the deep-down caring for one another that makes Endicott so special. Yes, we all have disagreements just like siblings do. We’re a family, you know?”

That familial feel is a throughline for the alumnae when it comes to giving back.

“I made lifelong friendships at Endicott,” said Grassi. “One of my very dearest friends lived on the same floor with me at Endicott. The way that it was, and at that time in our history, being able to form those friendships has been wonderful to me. I’ve traveled over the world with those friends.”

They also all credit the marvelous teachers they had—including current Professor Emeritus Melvin Manson—and even administrators like former Endicott President George O. Bierkoe, who retired in 1971.

“President Bierkoe used to have tea parties with Dean [Eleanor] Tupper at their house on the water,” said Grassi, “and he said something to me at that time that I’ve shared with many others. He said, ‘Never fall in love, climb to it.’ I’ve told that to friends, friends’ children getting married over the years.”

For Endicott’s current and rising alums, Barnes views giving back as an extension of Endicott’s core value of community service.

“Think about why you’re so successful today and whom you have to thank besides your mom, your dad, or any other mentor in your life. What about thanking the institution?” said Barnes. “That is important to me, and it’s part of your legacy as alumni.”