When the war in Ukraine started, Laura Ella Kocourek ’07 jumped into action with the help of friends near, far, and at Endicott. 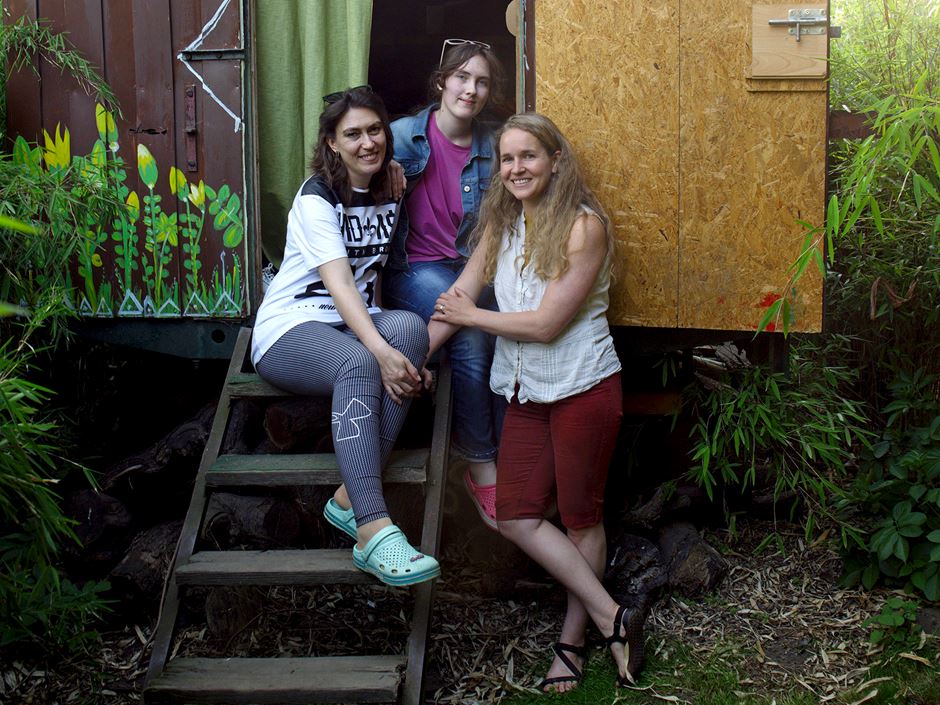 Two days after the Russian invasion of Ukraine in March, Laura Ella (Hall) Kocourek ’07 was in a Prague park watching her sons play with two girls who’d just arrived from Ukraine.

“I get emotional thinking about their mother,” Kocourek recalled. “I can still see her face. She was like a ghost, and I had this moment of like, ‘This woman could be me.’ I knew then that we needed to help these people.”

Soon, trains packed with Ukrainian refugees were arriving in Prague. The invasion had opened a new chapter in the ongoing Russia-Ukraine saga and sparked a humanitarian crisis with it.

The refugees were overwhelmingly women and children—under orders from the Ukrainian government, men ages 18-60 were required to stay and defend the country against Russian forces. Even many elderly people, Kocourek noted, opted to remain in Ukraine for fear of undertaking such an arduous journey, and some “want to spend their last days fighting against Russia,” she said.

A week after that day in the park, Kocourek, who grew up in Amherst, N.H., learned of a refugee shelter beside the grocery store she frequents.

“I saw some volunteers working and I introduced myself and said, ‘I’d love to help but I’m not very good at construction work,’” she said.

So, she ordered everyone pizza and found herself welcomed into the group led by Pavel Oskin, a landscape photographer who’d left Russia for Prague in 2008. 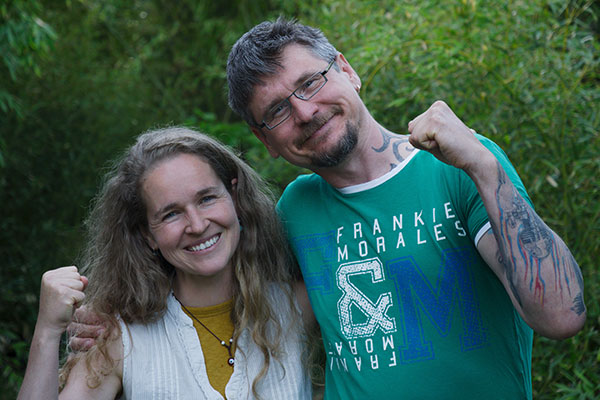 “I learned the story of what was going on and got to know Pavel on a deeper level,” remembered Kocourek. “I said, ‘Pavel, I want to help you. I can social network, I can find stuff, my husband knows lots of people…’ And he said, ‘I need beds, just find me beds.’”

But to understand how Kocourek found herself in Prague working with Oskin and Ukrainian refugees in the first place, you have to go back almost two decades. It is a sprawling, international adventure that kicks off at Endicott and winds its way through the Czech Republic, Vermont, and even Japan … and it all begins with a cup of tea.

When Kocourek saw Endicott for the first time, she knew it was the place for her. It was also the place where her plans went slightly awry, in all the best ways.

She’d originally planned to play soccer during her college experience, but a leg fracture sidetracked that idea. In her junior year, Kocourek was enamored with the idea of studying abroad in Italy, but then Professor of Political Science Michael Kilburn stepped in.

“Everyone was going to Italy at that time,” said Kilburn, who’d penned his doctoral dissertation on Czech politics, and has an ongoing interest in Central Europe. “I had recently come back from Nepal and I said, ‘What about a nontraditional destination? Somewhere where everyone is not speaking English?’”

“He said, ‘Why don’t you go to Prague?’” said Kocourek, who majored in history and minored in political science. “And I said, ‘Okay, where’s that?’”

In Prague, Kocourek studied at Charles University, struggled to master the Czech language, and sipped tea at the Dobrá čajovna teahouse every day.

She returned to Endicott, graduated, and took a job teaching history in Burlington, Vt.—first at a private high school and then at a school for at-risk youth. Kocourek liked working with high schoolers, even though she wasn’t that much older than her students. Their tendency to question the way the world worked meshed well with her philosophy and her love of people.

“The classes at Endicott taught me that what I thought I knew about history was just one very small side of the whole story,” she said. “And that was an interesting thing for me and led me to my thesis, which was about oral history and stories as history.”

One day, while strolling through Burlington, Kocourek walked past a café called Dobrá Tea. 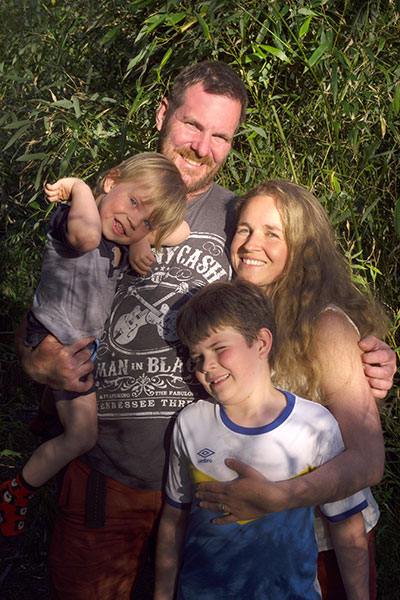 Kocourek, her husband, Honza, and their two sons

“I asked if it was connected to the tea franchise in the Czech Republic,” she said.

It was the same franchise that Kocourek frequented in Prague while studying abroad.

Kocourek took nightshifts in the teahouse and taught during the day. Soon, she was offered the manager role, “which gave me the opportunity to travel and run a business,” she said. “I thought it could be an interesting opportunity.”

A year later, on a business trip to Japan to visit the tea gardens the business sourced its tea from, she met Honza Kocourek, who was there representing the Czech branch of the business.

Though they didn’t speak a common language—Kocourek could just barely recall the difficult Czech she’d once belabored over—they had such a strong connection that language didn’t matter.

“We went back and forth from the Czech Republic to Vermont for about two years until I decided that I’d like to move to Prague and be with him,” she said.

That was 11 years and two children ago.

A home away from home

Another one of Kocourek’s deciding factors in moving to Prague was the bamboo nursery her husband owned. “After I visited him and saw it, I thought, ‘We can’t just pack this up and move it,’” she said.

Today, that garden is now a refuge for displaced Ukrainians. 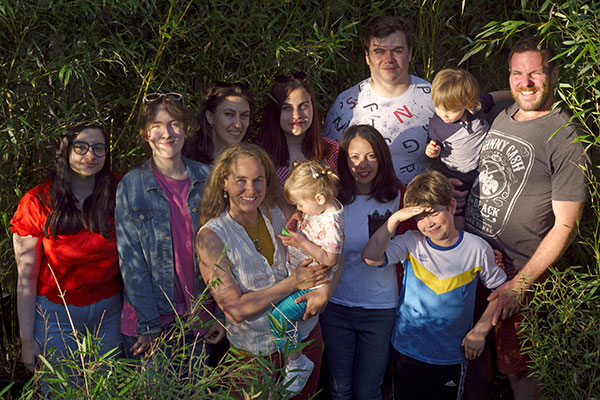 Kocourek and her family pictured in the bamboo garden with some of the Ukrainian refugees she is housing “Because we own a very big garden center, we’ve always had a connection with Ukrainians,” said Kocourek. “They’re excellent workers—usually the men come to the Czech Republic because they can make almost three times what they’d make in their small village back home.”

Even before the war started, the Kocoureks were used to housing Ukrainians. “The workers would stay at our home so they wouldn’t have to pay for accommodations here,” she said. “When the war started, those men had to stay in Ukraine and fight, so we had these vacant spaces.”

Situated in the bamboo garden are a caravan (formerly a storage unit) and a small apartment where Kocourek currently hosts two families—a mother and her 16-year-old daughter, Alonya, from Kharkiv, and a mother and father and a two-year-old girl from the Luhansk Oblast region.

The latter group “had been on the road for four days without sleeping,” recalled Kocourek. “When they arrived, you could see it on their faces. All they wanted was to lay horizontally.”

Since the war, Kocourek now divides her time between fundraising, gathering supplies, working as a mother and part-time yoga and English teacher, and helping Oskin with the shelter (which accommodates 72 women and children) and his nonprofit foundation, Úkryt (Czech for shelter), which will open in June.

Oskin’s shelter—located in a former Vietnamese restaurant that was slated for demolition—came about after he raised nearly $20,000 off Facebook. Inside, everything is new, from the showers to the beds, kitchen appliances to mattresses and linens.

“We worked hard for good conditions for them,” he said, “and we did good work.”

The shelter houses just women and children, mostly from the most attacked region, Mariupol, “and most of them have no possibility to come back because their homes are destroyed,” said Oskin. The Ukrainians will stay at the shelter for a maximum of two months and, with Oskin’s and Kocourek’s help, will eventually land in normal accommodations.

Both Oskin’s and Kocourek’s fundraising efforts are largely grassroots. Back home in New Hampshire, Kocourek’s mother collects donations via Venmo and transfers them to Kocourek, who keeps the funds in a separate account. All of it is used to aid the refugees. 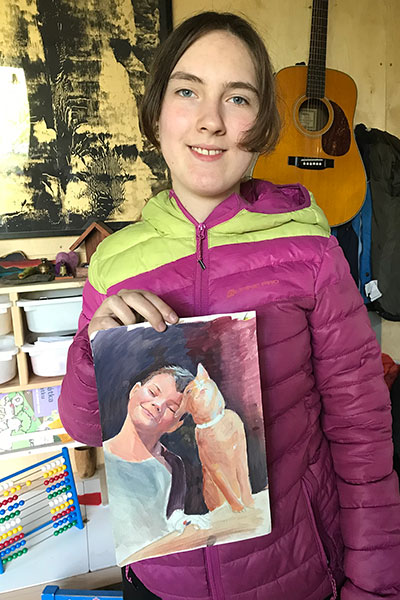 Alonya, 16, and her painting of Kocourek's son and the family cat “I meet everyone personally,” said Kocourek. “I don’t ever send money through an account. I usually communicate with them first and then we meet and have coffee and tea. I also bring a lot of the refugees to the bamboo garden so they can meet people and start a Ukrainian network.”

For this former history teacher who is now participating in one of the most historic events of the 21st century, Kocourek also provides another invaluable lifeline: friendship.

“I love people and talking to people, and people like telling their stories,” she said.

Just recently, Kocourek paid the deposit and commission for a Ukrainian mother who was able to transfer from her job in a hotel franchise to the Prague location. Her vision is that future donations go toward helping more people find housing, which is expensive in Prague.

“This isn’t my money—I am just a temporary holder. That’s what I tell the refugees. I say, ‘I am giving this to you, so you can live life a bit more easily here until you can go home,’” she said. “Until the war ends, I feel very fortunate that I’m in this position where I can give.”