A Lasting Legacy at the Nest

Influenced by countless stories and memories, Missy Welch and Julie Carrier follow in their grandmother’s footsteps to create an Endicott legacy. 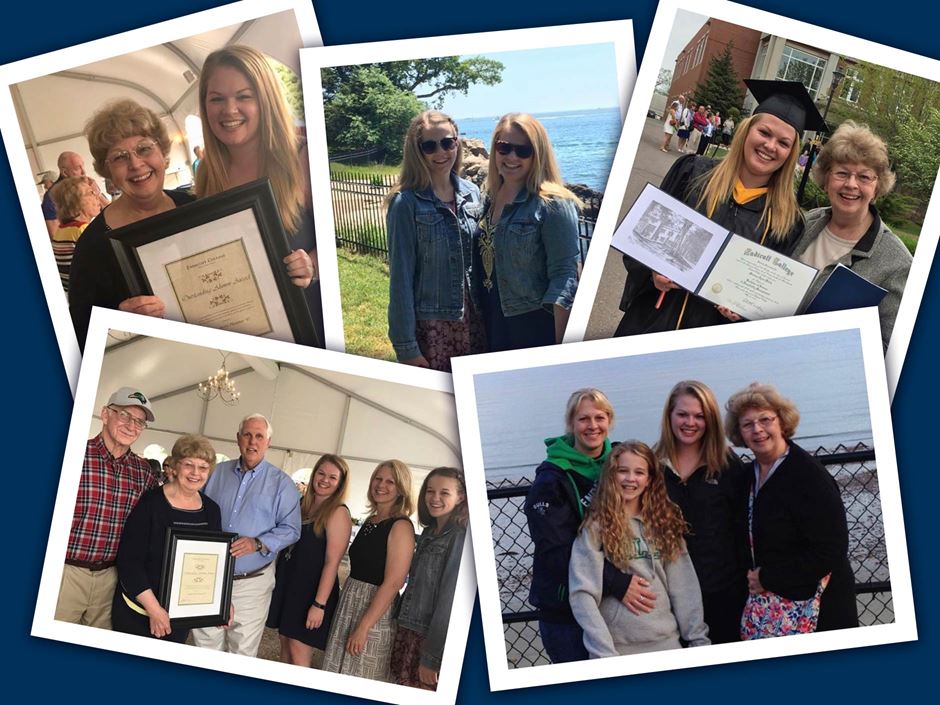 When it came time for Linda Plummer ’65 to choose a college, it was an easy decision. “I never even looked at another college, I just knew when I stepped foot on the Endicott College campus, that it was the place for me,” she says. And the same rings true for her two granddaughters, sisters Missy Welch ’16 and Julie Carrier ’24.

“I never even looked at another college, I just knew when I stepped foot on the Endicott College campus, that it was the place for me.”—Linda Plummer ’65

While Plummer was drawn to Endicott for its close proximity to the ocean, Welch and Carrier were influenced by the countless stories they heard from their grandmother while growing up. Welch, who is a Senior Meetings Coordinator at the American Meteorological Society, says, “My grandma actually came on one of the tours with me and she ended up sitting in College Hall talking to people she knew from the Alumni Council while I went on the tour. It showed how much of a connection she still had to the school all those years later.”

Carrier, on the other hand, got to see firsthand what it meant to be a Gull from visiting her older sister at the Nest. “Visiting my sister during Homecoming & Family Weekend was such an incredible experience. I got to feel the sense of community on campus that my grandmother told me about. I remember sitting on a couch with my mom during the lobster dinner at The Lodge and saying ‘I want to live here,’ and here I am about seven years later living on campus,” she says. Carrier just wrapped up her first year as an art therapy major.

If you ask Plummer her favorite part about being a Gull, she will tell you “having my granddaughters follow in my footsteps.” Plummer says that while Welch and Carrier both chose Endicott, all three of them have had their own unique experience, with both overarching similarities and differences amongst them. “Their experience is much bigger than mine; Endicott was a very small College when I was there. Now, there are so many activities and clubs—they are going 24/7 and they can’t get enough…when I was in school, I went to class, did my homework, and went to bed!,” says Plummer. Welch says that while physically the school is different, the friendly atmosphere and sense of community that her grandmother experienced is something that still resonates on campus.

Plummer recalls her time at Endicott as “wonderful.” Similar to Carrier, she studied art and says that there were plenty of creative opportunities for her on campus, and in addition to establishing a connection with her professors, she made lifelong friends. In fact, Plummer is so grateful for her educational experience and time at Endicott that she and her husband established the Linda '65 & Richard Plummer Scholarship, which she describes as “a natural decision” because of her family ties to the institution. “It was our way of giving back to Endicott and something that was important to us. There are so many kids who want to go to Endicott and maybe can’t because of the cost, so this is our way of helping,” she says.

“It’s amazing to go back to campus; it’s the same school, but it’s also so different. But, it’s different in a good way. It still has that uniqueness to it that some Colleges lose when they get too big.”—Linda Plummer ’65

Plummer loves any chance to return to her alma mater, especially with her granddaughters in tow. “It’s amazing to go back to campus; it’s the same school, but it’s also so different. But, it’s different in a good way. It still has that uniqueness to it that some Colleges lose when they get too big.”

It’s clear the three have an unbreakable bond. “I know how much this campus means to both my grandmother and older sister, so getting to experience all the same joys of being a Gull is truly indescribable. It is a commonality that has created a really strong unique bond between us,” says Carrier. Welch, who was on the Alumni Council with Plummer, says that she is so grateful that she followed in her grandmother’s footsteps and that they have this shared experience together and with her younger sister as well.

Will there be a third generation of Gulls to carry on this family legacy? Welch says that it’s indeed a possibility. But, I guess we will have to just wait and see.