A Banner Year for the Gulls 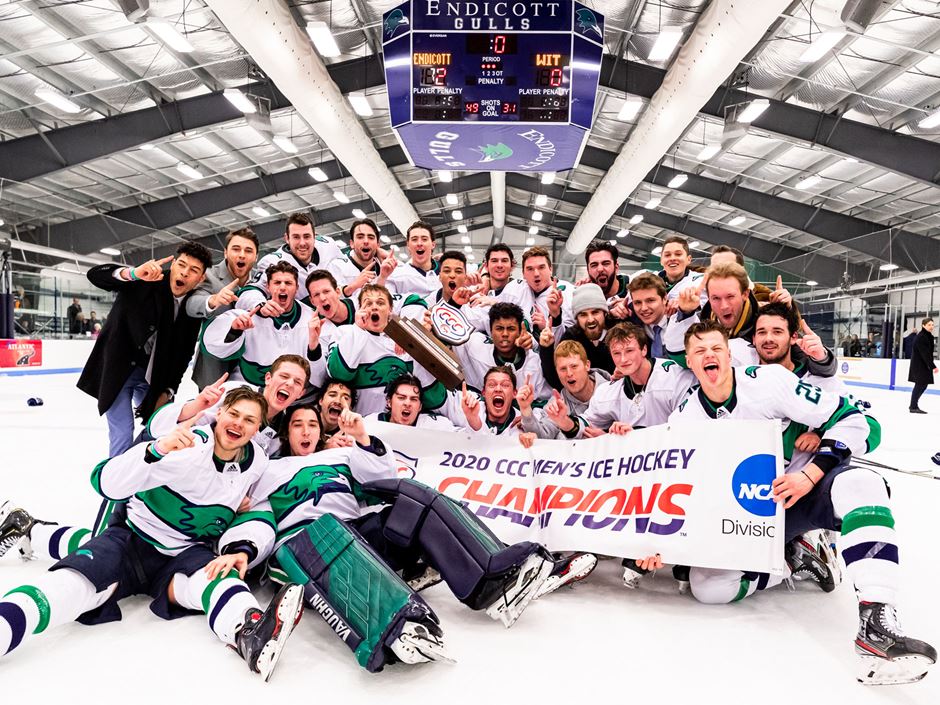 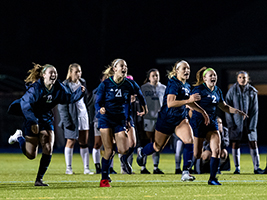 While the disappointingly shortened 2019–20 athletics season has been anything but normal, it was long enough to provide a backdrop for an amazing Gulls milestone: up until NCAA sports were canceled in March due to COVID-19, every single Endicott varsity program competed in its respective conference championship—an extraordinarily rare accomplishment.

Kicking things off in the fall, the Gulls witnessed their teams compete in the Commonwealth Coast Conference (CCC) championship games in field hockey, men's soccer, women's soccer, women's tennis, and women's volleyball. And if counting men's and women's cross country and football—whose championships weren't sponsored by the CCC until 2000, 1999, and 2017, respectively—Endicott would be the first-ever athletics program to have all of its fall teams compete in every championship in the same year in league history as well. Ultimately, championship trophies were hoisted in both field hockey (who also earned their first national ranking) and women’s volleyball (their seventh championship in program history). The equestrian team does not have a traditional conference championship, but they did qualify for regionals. 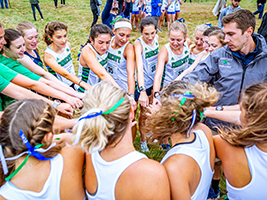 With the start of winter sports, the Gulls had their eyes on even more opportunities to continue their winning ways. In basketball, both the men’s and women’s teams advanced to their CCC championship game. While the men’s team fell short, the women’s team was victorious and earned their first championship in program history—along with Endicott’s 100th overall conference championship since our combined (men’s and women’s) NCAA Division III membership began in 1994. The very next week, both the men’s and women’s ice hockey teams were victorious on home ice in their championship games (CCC for men and Colonial Hockey Conference [CHC] for women). Between fall and winter, Gulls varsity athletics teams combined to go 192-77-4 overall (.711) and 99-17 in conference play (.853). A truly staggering achievement!

“I’m overcome with thoughts of celebration and excitement of the 2019–20 athletic season with so many programs reaching milestones and individual achievements,” says Brian Wylie, Assistant Vice President and Director of Athletics. “But those parallel the tremendous loss and disappointment of some of our winter and all of our spring programs. Despite it all, what I’ve reflected upon the most is the tremendous resiliency and resolve that these student-athletes have demonstrated. We talk a lot about leadership with our student-athletes, and never have we been so proud in how they collectively handled an extremely difficult situation. One thing is for sure, it’s a privilege to see Endicott’s great and committed coaches work with a phenomenally talented student-athlete group, and we’re excited to get back after it!” 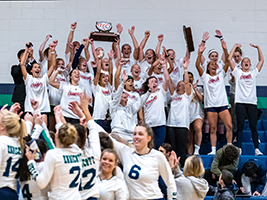 With a curtailed year of sports, it’s a bit hard to not imagine what could have been. The five conference championships won in the fall and winter already ranks third (in a tie) on the College’s all-time list for a single season. The current record stands at eight, but it’s pretty easy to see how that number may have been surpassed this season under other circumstances. The men’s volleyball team entered the spring nationally ranked at number four—a program record. The baseball and softball teams were situated first in their respective CCC Preseason Coaches' Polls, while the men’s and women’s lacrosse teams were positioned second in theirs. Women’s lacrosse entered the year as the three-time defending champion, were nationally ranked at No. 20, and knocked off No. 16 Trinity. It’s difficult to think about what opportunities were lost, but The Nest now must look forward to the day our incredible student-athletes return to play and continue raising banners at an incredible pace.