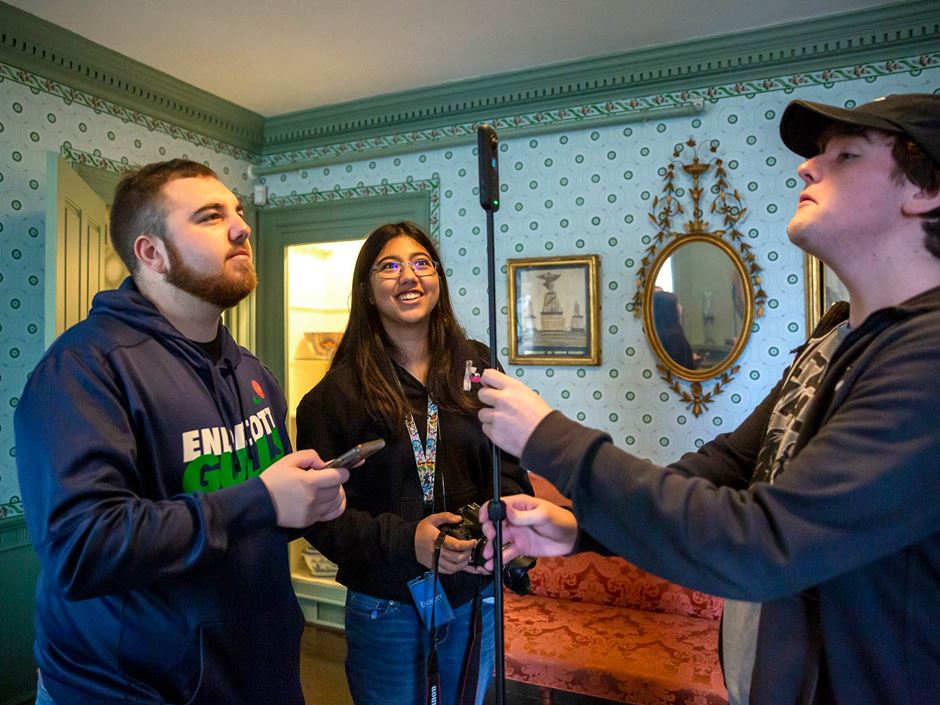 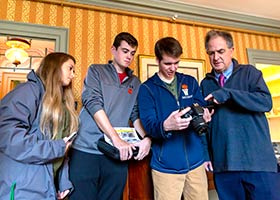 The art of storytelling requires creativity, research, and heart—but above all, it requires a suitable platform through which the story itself can be told. These platforms are constantly evolving—be it radio and newspapers, or podcasts and viral social content, a storyteller’s ability to engage their audience rests on using the best method of sharing a message. When students in the School of Communication Digital Media program learn to use the variety of platforms available to them, they now gain an additional tool to put in their skillset—virtual reality (VR) and augmented reality (AR).

Virtual reality offers a complete digital immersion experience, using vision, sound, and touch to transport a user into real or imagined environments. Oculus Rift or Google Cardboard are examples of hardware that facilitates this immersion. Augmented reality is a less-encompassing technology that superimposes digital creations on a real-world backdrop, such as when playing the game Pokémon GO or using Snapchat lenses. As VR and AR develop and become more prevalent in everyday life, they have the potential to change how people work, live, learn, and interact.

A Fall 2019 pilot course, Storytelling Using Virtual and Augmented Reality (DM 377), introduced Endicott College students to an in-depth look at VR/AR. Says course instructor Professor John Donovan, “VR and AR have already impacted fields ranging from video gaming to medicine to manufacturing, but how they will affect traditional storytelling in TV and film is an open question. Students who experiment with these technologies today could well be shaping the future of screen media storytelling.”

According to Donovan, Endicott’s offering of VR/AR learning as part of a communications course, rather than a more technical program like computer science, sets us apart—and it turn, sets Endicott students apart. Says Jenna Brown ’21, a Digital Media major pursing the TV/film concentration, “I truly believe that this course is incredibly beneficial in giving Endicott students a way to promote their brand to employers as someone who is knowledgeable in terms of future possibilities of content creation.”

"This was my first real experience with VR,” says Lisamarie Demerjian ’19, who is currently working as a local reporter. “Considering I’m a digital media major with a concentration in journalism, I like to be proactive and consider all potential storytelling platforms, like VR." Even students like Will Fazekas ’21, who don’t necessarily see themselves focusing on AR/VR production as a career, were inspired by particular aspects of the VR/AR technology. After taking this course, he says, “I want to implement more opportunities into my professional life that would allow me to film projects that have a greater focus on immersiveness.”

In addition to preparing students to take on an additional cutting-edge skills and deepening their focus on the audience’s experience of what they produce, learning VR and AR is just plain fun. Using 360-degree cameras, spatialized microphones, Oculus VR headsets, and a variety of ancillary gear, students learned to shoot and edit immersive narrative shorts and create augmented reality tours that wove virtual content into real spaces. Says Brown, “I was amazed at how real it feels once you have the headset on with sounds and visuals; you completely leave the real world…It's amazing how new technologies are able to transport us into a new world right from our own house or classroom.”

“It's amazing how new technologies are able to transport us into a new world right from our own house or classroom.”—Jenna Brown ’21

As a group project, the class collaborated with the Cape Ann Museum in Gloucester, Mass., to photograph and assemble a virtual tour of the Elias Davis House, an 1804 ship captain’s home that is otherwise only viewable through guided docent tours. Working with Assistant Professor of History Elizabeth Matelski, known for her work combining liberal arts with digital research, the class traveled to Gloucester for an extensive filming session, putting together an interactive experience for virtual visitors—perfect now that the museum is closed due to coronavirus. The tour features about 50 tagged objects with rich information and audio explanations of individual pieces, using a combination of 360 footage, individual photos, and scripted narration produced by James Kelly ’20, an Endicott student interning with the museum. Says Donovan of the museum project, “What was most surprising to me was how many of [the students] were floored by the reaction of our Cape Ann Museum clients. Students are used to feeling the satisfaction of sharing their videos with appreciative family and friends, but the pleasure they received from sharing their tour with an enthusiastic client seemed qualitatively different in terms of boosting their own pride and confidence.” 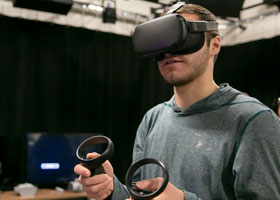 Solo projects wrapped up the semester, allowing students to explore personal interests while diving further into the concepting, filming, and editing of a VR story. A group of faculty and staff joined in a viewing showcase in December, watching student presentations and then experiencing the final projects firsthand using VR equipment. Projects ranged from a musical and music video, an “in the round” short film, a guided demonstration of how to use boxing techniques to increase fitness, exploration of the Salem Willows park, and virtual tours of Endicott’s Walter J. Manninen Center for the Arts, the College Chapel, a working farm, and a family-owned eyeglasses store.

Says Tristan Torrents ’20, who produced the fitness through boxing video, “Before this class I always thought about VR as gaming in virtual reality, but after the knowledge gathered in this course, I realize that you can make a lot of things with VR.” By looking at the variety of works in that end-of-semester student showcase, it’s clear he’s right on track—the possibilities are endless, and right at students’ fingertips.

The success of Storytelling Using Virtual and Augmented Reality (DM 377) was strong enough that it has become a permanent part of the Digital Media curriculum and will be regularly offered as an elective course. Learn more about Endicott’s Digital Media major here.