To Protect, Serve, and Comfort

Gary the poodle is a popular, precious addition to Endicott’s police force. 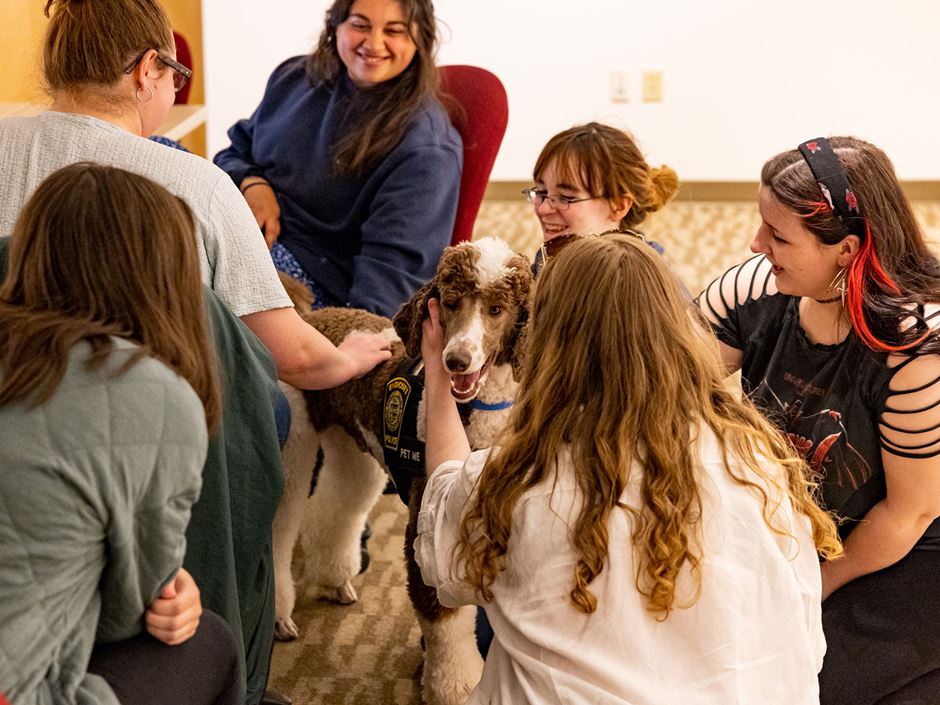 “His social calendar is fuller than I think mine will ever be,” said Officer Elliot Lanciani, the standard poodle’s full-time handler.

Right now, any Endicott community member can request a visit with Gary by filling out a simple form—however, getting on Gary’s calendar is tricky, given that everyone wants a little facetime with this adorable, personable pup.

Dogs are nothing new at Endicott. “We’ve been doing therapy dog visits on campus since 2018,” noted Laurie Souza, Coordinator of User Services at Halle Library, who has also incorporated comfort animals into several library events, including the popular Pajama Party that Gary attended this year. 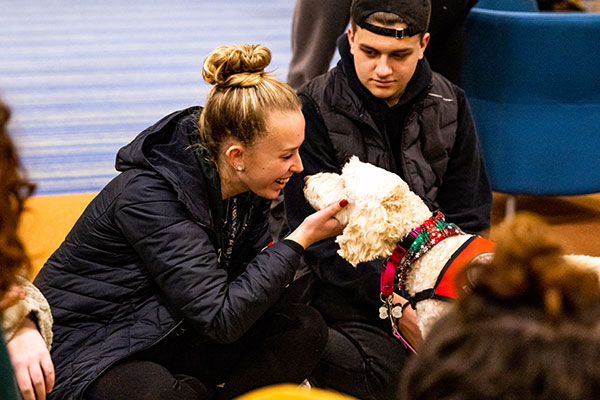 “It helps students connect with each other, and it gives them an opportunity to talk about a being in their life that they really love and miss,” she said. “The students like Gary a lot. They think he’s soft and sweet.”

With a full-time dog on campus, Souza now hopes to bring Gary further into the fold in a very special way. “We’d like to have him come get a library card,” she said. “I have some books for him, too.”

As with the pet-focused initiatives Souza spearheads, alleviating stress and offering a pleasant distraction are some of Gary’s primary purposes.

“He’s an unconventional tool,” Lanciani said. “Most people would expect us to only call a counselor or an ambulance, which might still be a step in the process, but he can alleviate the stress of going from zero to a full-on crisis.”

Chief of Police and Director of Public Safety Kerry Ramsdell knew a comfort dog could be an effective resource and rallied to get Gary into a uniform.

“This was a real passion project of mine, and part of my desire to further help our community,” she said.

After presenting the idea to President Steven R. DiSalvo, Ph.D., “the College was in full support of it, knowing how it would allow for us to interact with our students better, de-escalate situations, provide more mental health support, and really aid students in crisis situations,” Ramsdell said.

Through the nonprofit Hero Pups, Endicott secured Gary—the first pup to ever serve on the College’s police force. (Hero Pups has also provided therapy animals for Souza’s events in the past.)

“It happened faster than we thought, which we were very excited about,” Ramsdell said. “Usually, it’s about a year waiting period, but Gary was pretty far advanced in his training, so we were able to adopt him sooner than expected.”

“When we went to meet him, Gary wouldn’t leave me alone,” Lanciani added. “It was just a perfect fit.” 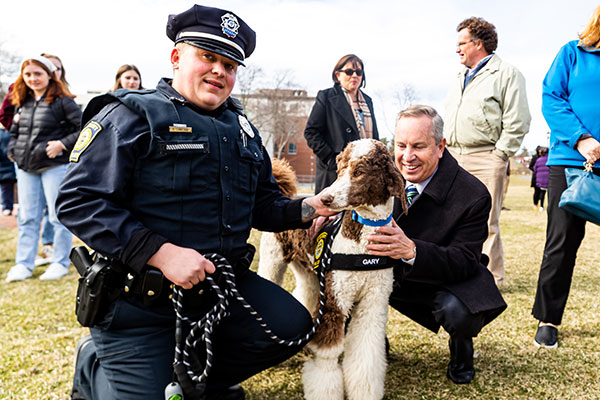 Lanciani said that Gary has changed his schedule for the better. “Living alone, I can just sleep in whenever. Now, I’m like, ‘I have to take Gary for a walk, so I’ll get up at a responsible time,’” he said. “He and my cat also get along so well. As soon as we’re home, he comes in and kisses the cat, who’s usually sleeping on top of his bed.”

When it’s time to report for duty, Gary has no problem snapping into action. “He gets dressed and I get dressed,” Lanciani said. “He even has a special leash that he uses for work instead of at home. He’s very well-trained. We’re really fortunate.”

From 3 p.m. to 11 p.m., Thursdays through Mondays, Lanciani and Gary make the rounds at Endicott as police partners, protecting and serving the campus at large.

As part of the force, Gary is equipped to comfort Endicott community members and especially students, whether they’re in the midst of a mental health crisis or just feeling homesick. Due to schedule restrictions, Gary cannot conduct visits with individual students at this time, but he can be easily found making social calls on campus, where he loves posing for photos, accepting pets—just ask first, please—and inducing smiles.