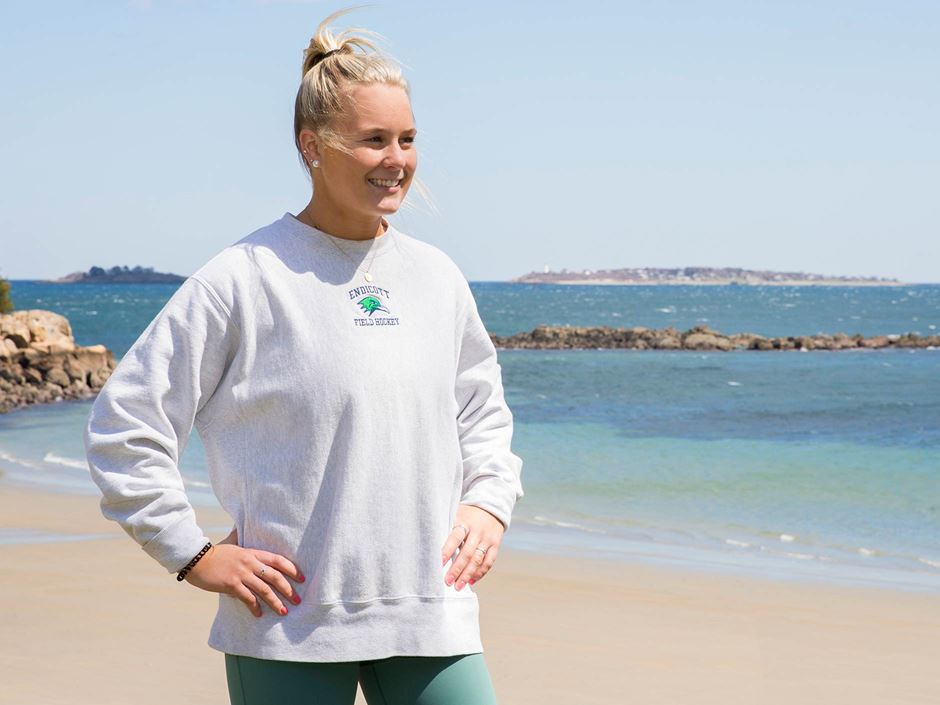 Endicott College student-athlete Jenna Seibold ’24 spent December 2020 changing an everyday workout with a friend and fellow athlete into a game-changing fundraiser. Last winter, in New England, Seibold and her workout partner and friend Sammy Davis of Boston University swam repeatedly in the freezing cold to raise funds and general awareness of the Travis Roy Foundation.

“Sometimes I think people forget there are things bigger than ourselves. There is a bigger picture and with everything going on with the pandemic sometimes it’s hard to look past some issues we are facing ourselves.”—Jenna Seibold ’24

The long winter break provided the initial inspiration for the shift from a typical activity to something that gained incredible momentum. Seibold says, “Sammy and I worked out together at the Institute of Performance and Fitness for about a year [before December]. Because our break was so long this winter, we were working out together every day for a couple of months. At that point, it was the middle of November and I had already been dunking [in the ocean] for a couple of months.” 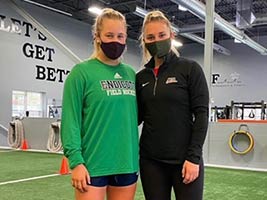 Jenna Seibold ‘24 and Boston University's
Sammy Davis worked out together for about
a year before beginning fundraising efforts.

Sammy came with me one day after a workout and had mentioned using the month of December to raise money.”

The choice of where to direct their funds came from current events. Seibold says, “When we brainstormed what we should do, Travis Roy came up first in the conversation. Travis Roy had passed very recently and it had left a mark on the hockey community, especially Boston University and Tabor Academy (Sammy is an alumna of both).”

She continues, “After his accident, Travis dedicated his life to helping others with spinal cord injuries and funding for research. It was clear to us we wanted to dedicate something in his honor. So, for the month of December, we decided to do 24 jumps in a row for the Travis Roy Foundation because he was number 24.”

And at this point, though the month of December is well over, Seibold continues to dunk into the icy ocean. “I have kept going for my dunks and as of May 6, I am on day 246 and plan to keep going for as long as I can,” she says.

When the dunks began, the pair set a goal to raise $2,400, but they left that number in the dust very quickly with the help of social media and an invigorated community. Seibold says, “To date, we have raised $15,600 dollars for the Foundation. We surpassed our initial goal a lot quicker than we thought and it just kept escalating. We accomplished it through posting the funding link videos of our dunks every day through December, and also a dunk in the Cape where many people joined us including Boston Bruins’ Chris Wagner.”

For Seibold, the present and future include more water and more fundraising, but for different causes. She says, “I have teamed up with the Massachusetts State Police hockey team in my efforts to keep raising money. I am currently raising money with swims for breast cancer awareness and Give Kids the World.”

"The most rewarding thing about this whole experience was to see the support from other people. Having people you don’t even know come together and show their support for you is incredible, especially during a time where there’s a lot of negativity in the world.”—Jenna Seibold ’24

Seibold feels that a team and community-driven approach led to her and Sammy’s success. She says, “This was a team effort from everyone involved, whether they donated or just came to show support; what we accomplished could not have been done without everyone involved and we appreciate that more than they know. After doing this, I encourage people to get out of their comfort zone and do something good. Whether it’s small or big, these little efforts will go a long way.”

All we can say is...inter-collegiate athletic team-ups for good? We’re here for it! Congratulations Seibold and Davis! We love watching you change the world.