For many Endicott alumni, the potential to innovate, advance, and make a difference has pulled them right into the center of local and regional politics. 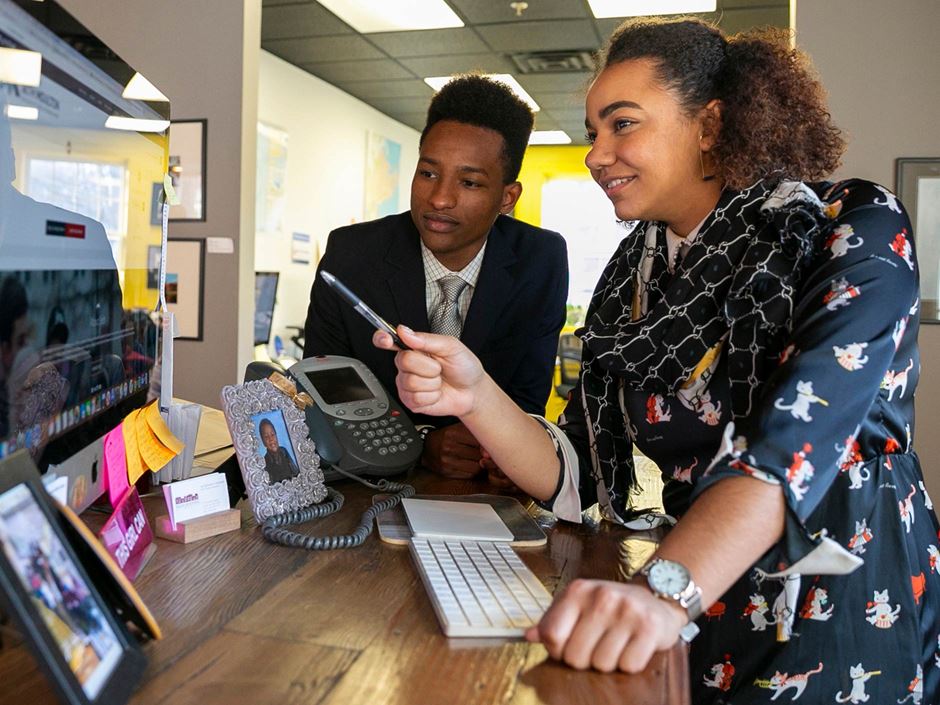 With a political season that dominates the news circuit and engaging conversations between friends, families, and colleagues, it can be difficult to resist the siren call of getting involved in the excitement of American government. For many Endicott alumni, the potential to innovate, advance, and make a difference has pulled them right into the center of our political world as they seek to shape the future of our country. 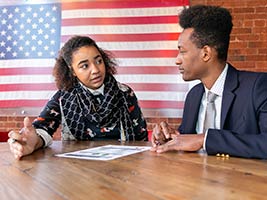 Abdourrachid Sow ’20 and Isis Patterson ’19 have both been instrumental in Massachusetts politics. Sow interned for the Office of Congressman Seth Moulton in 2019 and Patterson currently works full-time in that same office as Staff Assistant and Constituent Caseworker.

Sow, like many activists before, has had politics thrust upon him. He says, “I became involved with politics at a very young age when war ravaged my country. I experienced firsthand the aftermath of war, namely loss of property, extreme poverty, famine, lack of basic necessities, lack of education, and refugeedom. From that moment on, I decided that I wanted to become a diplomat and work in conflict resolution.”

Though most of us will never experience a political awakening in quite the same manner as Sow, he encourages all people to get involved. “I think every individual on this planet should be involved in politics in one way or another, as politics affects every aspect of our lives,” he says. “An informed populace has the power to shape the policies, governments, and the institutions that govern them.”


“I am intrigued by the power of politics and how it shapes our perception and society. Politics is manifest in every aspect of human interactions—in every institution and transaction—and it can bring us close together or drive us apart.”—Abdourrachid Sow ’20

Jot Sow’s name down now as an up-and-coming political juggernaut. He has big dreams and we are confident that he will achieve them.

Like Sow, Patterson began her journey toward politics early on. She says, “I first became interested in politics as a result of my internships at homeless shelters and an affordable housing developer. During my time interning at Family Promise, a small family shelter in Beverly, Mass., I experienced many challenges.”

She continues, “I worked as a receptionist doing intake for the families admitted to the shelter, and in that position, it was at times difficult to have to turn families away or refer them to other shelters that had more capacity, only to learn they’ve been turned away from those shelters as well. It was then that I realized the final resolution to homelessness should not be funneling people through shelters; the true solution is to provide more affordable housing and help people to retain the housing they have.”

As a result of her epiphany, Patterson changed her major from political science to self-declared public policy. “I believed that change in my education would allow me to research and analyze policies that truly work to better the lives of the public,” she says.

The theme of Patterson’s overall life track has been a strong desire to help, and she does just that each day. “No day in my role is ever the same,” she says. “However, if I could visualize a typical day in the office, it would probably be interacting with constituents from all over our district and trying to assist them with the issues they may be experiencing with federal agencies. We are literally advocates, advocating on behalf of our constituents to the agencies they are encountering difficulties with.”

That Patterson has found her calling is apparent when she talks about how she personally defines success in politics. She says, “If you want to succeed in politics by improving the lives of the public and the constituents that you serve, it will take courage, empathy, transparency, authenticity, accountability, and ethical behavior.”


“If you want to succeed in politics by improving the lives of the public and the constituents that you serve, it will take courage, empathy, transparency, authenticity, accountability, and ethical behavior.”—Isis Patterson ‘19 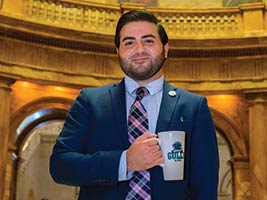 Christian Nakkashian ’17 is also on the pulse of the Bay State’s political scene in his position as Deputy Director, Constituent Services/Internship Coordinator in the Office of Governor Charlie Baker, a role that he earned after interning there.

Nakkashian loves how small town politics have the propensity to affect real change in our world. Throughout his political career, Nakkashian has advocated for cutting taxes, balancing the budget, reducing government spending, advancing LGBTQ rights, and protecting women’s right to choose.

Nakkashian, a Massachusetts native, is passionate about representing the people here. He says, “Although I grew up in California, I was born in Massachusetts and decided to move back for college. I knew I wanted to become involved in politics in Massachusetts, knowing we’ve had some great Republican politicians like Governor Weld, Governor Romney, and Senator Scott Brown. Once I heard Charlie Baker was running for Governor in 2014, I knew that his campaign was the one I needed to get involved with.” 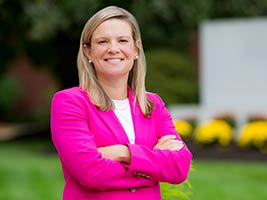 Making an impressive local impact is Mayor of Medford Breanna Lungo-Koehn ’02. As the title implies, she is a busy woman. “A normal day for me is checking and responding to 200–300 emails, 4–7 meetings, returning 5–10 phone calls, reading and signing contracts, dealing with 1–2 employee matters, and putting out one fire,” she says. Lungo-Koehn also chairs school committee meetings once a week and, prior to COVID-19, she attended 1–3 events and visits a day.

Lungo-Koehn knew she wanted to help shape Medford even before she graduated from Endicott. She says, “I was 20 years old and wanted to join an almost all male council where there was no one under the age of 40 or 50. I wanted to speak out for the youth
and be a young female voice for the city I was born and raised in. In my early years, I worked hard with a number of families and pushed to implement a high school girls hockey team, kept our park league program alive, and advocated for many issues involving our youth, families and seniors.”

Prior to running for office, Lungo-Koehn had a successful law practice that she had owned for over 10 years, and had no plans to pursue the mayor seat. She shares that she only ran because she saw things going in a direction that she was not happy with and wanted to make Medford a better place for her family and others.

In line with her goal, she is actively making Medford more exceptional. Lungo-Koehn is advocating for enhancing the City’s tree canopy and improving streets, sidewalks, parks, playgrounds, buildings, and schools, as well as pushing for charter review, racial equality, and parking reform.

Victoria Bonney ’06 has stayed relatively close to the Nest by taking on the role of Communications Director for Maine’s First District Congresswoman Chellie Pingree.

“As Communications Director for a member of Congress, it’s exciting to open the newspaper or turn on the TV and see the words I wrote for the Congresswoman shared broadly,” says Bonney. “It’s a distinct honor to play a small role in shaping the national political discussion.”

“As Communications Director for a member of Congress, it’s exciting to open the newspaper or turn on the TV and see the words I wrote shared broadly. It’s a distinct honor to play a small role in shaping the national political discussion.”—Victoria Bonney ’06 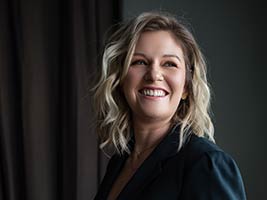 She continues, “There are 535 members of Congress and each office only has one Communications Director. I never take for granted the unique honor it is to be a senior staffer on Capitol Hill and how lucky I am to work for a member of congress who is not only principled and whip smart, but also exceptionally kind.”

Bonney is passionate about involving everyone in politics, as she truly believes no one is apolitical. She explains, “When you drive on public roads, get married, voice an opinion without being jailed, eat food with confidence that it is safe, have letters delivered to your door, or even walk your dog in a city park, you are engaging with our political system.”

Bonney started her political career at age 19 as a Field Intern for the Howard Dean campaign, which controversially spoke out against then President George W. Bush’s invasion of Iraq. While Dean’s campaign ultimately did not succeed, politics took root in her and changed her path forever. We are inspired by her continued drive and dedication to democracy. 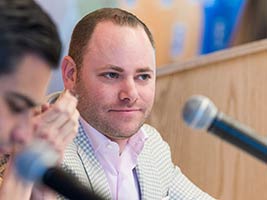 Brian Y. Goldmeier ’06 is a pillar of one of the most robust communities in the Southeast. As the Principal at BYG Strategies, Inc., based in Miami, Brian has spent the last decade helping politicians and candidates make his community a better place.

“Miami politics are truly unique,” says Goldmeier. “The non-partisan nature of our elections provides candidates the ability to run on issues important to all Miamians and forgo the political polarization that is currently the status quo in our national politics. Rather, we debate opportunities to meet the important challenges facing our community, such as transportation, affordable housing, and climate change.”

Goldmeier’s involvement in local politics has allowed him to be the youngest person to sit on the United Way of Miami-Dade board. On a daily basis he is able to work with “some of the smartest, most passionate people,” to create a meaningful impact and meet the challenges for some of Miami’s most vulnerable fellow citizens.

Whether it’s working in-house or consulting, a local or national scale, Republican or Democrat, one thing is for certain: we expect the contributions of Endicott graduates to echo in government buildings and history books for years to come.