More Than Just a Name: Meet Our Named Building Donors

What is behind a name? In part two of our recurring feature, we take a look at how two Endicott College alumnae have had lasting impacts on the community through their support of the sciences and athletics. 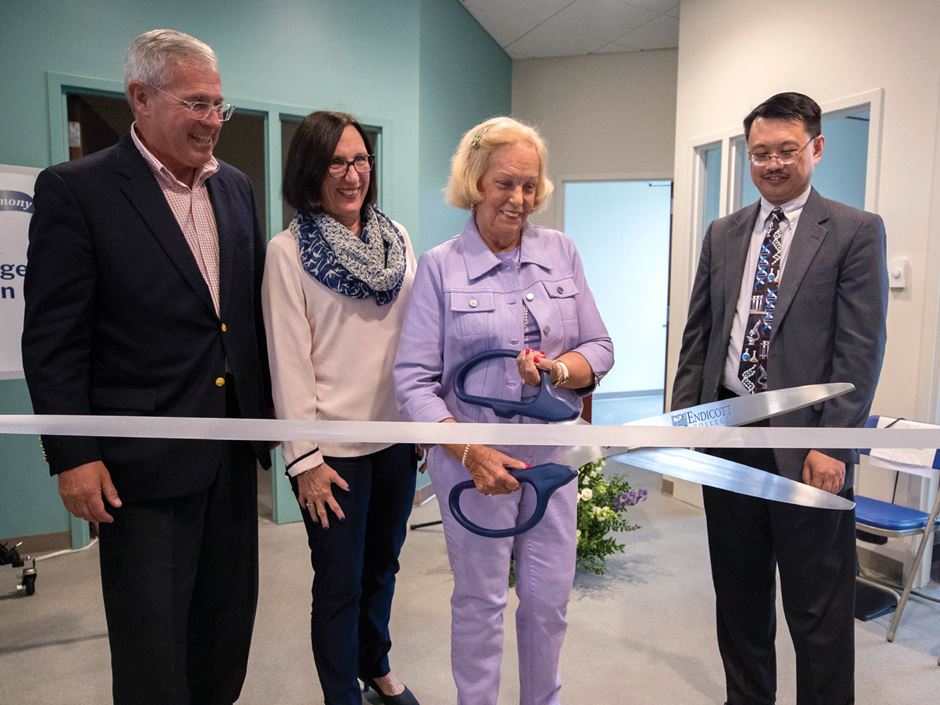 Since its inception in 2003, Hempstead Stadium has served as a hub for Endicott Athletics—and the College as a whole—with marquee events such as Commencement and the recent inauguration of our seventh President, Steven R. DiSalvo, Ph.D.

The stadium arch is beautiful and classic. It definitely has a Charleston feel with that black ironwork. I love it. And I love seeing kids run through there and jump up and touch it.”
—Melissa Hempstead ’69 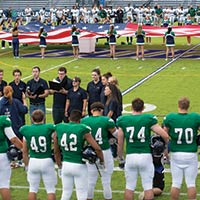 Hempstead Stadium went through
a transformation in 2015.

Hempstead, a huge football fan, has been an active Endicott community member for years through the Alumni Council and as vice chair of the Board of Trustees. Her dedicated commitment to and generous philanthropic support of the College didn’t go unnoticed, as former Endicott President, Dr. Richard E. Wylie, said he would like to name the football stadium after her.

Her response? “You got it! That’s perfect for me.”

Hempstead, who owns the furniture store Coralberry Cottage in Mount Pleasant S.C., remembers coming for the unveiling of the new stadium arch with her business partner. “They pulled the cloth off of it and our first thoughts were, ‘that’s exactly what I would have designed if I designed it myself,’” she recalls. “It’s beautiful and classic. It definitely has a Charleston feel with that black ironwork. I love it. And I love seeing kids run through there and jump up and touch it.”

The Stadium is equipped with a FieldTurf surface and seating for 3,000 spectators, including new visitor stands with an 800-person capacity, built in 2012. It has a permanent scoreboard, concession stand, outdoor basketball courts, and electronically-equipped press box with a BOSE public address system.

Hempstead’s love for sports is contagious, especially for football. She supports all Boston sports teams, including the New England Patriots, and she even met Tom Brady while at her home on Block Island, R.I. “I’m in two football pools every single year, and I’m kind of a fanatic about football,” she says. As an educator, she also spent time in Louisiana while obtaining her master’s degree in special education at Louisiana State University (LSU), a school that certainly knows a thing or two about football.

But when it comes to colleges, it all started with Endicott for Hempstead. “Endicott gave me a voice that I never had before,” she says. And now her name will forever be etched on the stadium where endearing Endicott moments happen every day.

When the Ginger Judge Science Center opened in 2013, it was the beginning of a technological revolution here at Endicott. Students in STEM, humanities, and social science majors now had a new state-of-the-art facility where they could fuel their passions and dream big.

It turns out those dreams were really big, as a Science Center addition opened fewer than six years later in 2019 to accommodate the growing STEM programs at the College, including the new engineering major and a larger Makerspace.

I’ve seen the College come from basically nothing to what it is today, which is incredible.”
—Ginger Judge ’51

As the named donor for the home of Endicott’s sciences, Virginia (Ginger) Warwick Judge ’51 (Associate in Science) has seen the College transform from a small, two-year women’s college into the bustling and innovative hub that it is today. And the Board of Trustees member is proud to have helped along the way. “I’ve seen the College come from basically nothing to what it is today, which is incredible,” says Judge, who is the retired president/CEO of Honeycomb Company of America, Inc. 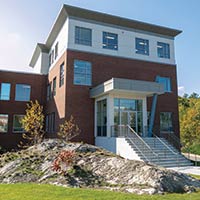 As Judge recalls, conversations for the Science Center began with Dr. Wylie. “I guess we got talking about it and it was nothing definitive,” says Judge. “A few months later Dr. Wylie mentioned he wanted to name the Center in my name. Then I was at Endicott when they opened the building and there was my name on the building. Honestly, I think he had the idea of my name on the Center in his head for a long time back but I’m not sure. I was up there for the opening of the addition, which is marvelous.” Unfortunately, the expansion opened after the passing of Dr. Wylie, a man who was instrumental in the growth of the College as the “Hard Hat President.”

Judge loves returning to campus and hearing from students and faculty about the exciting and innovative ideas they are forming in the Science Center, including the intrepid Ginger Judge boat’s voyage across the Atlantic Ocean all the way to France. It’s a perfect symbol of how far the College and its science programs have come, and the important role Judge has played along the way.