Since Endicott College was established in 1939, we have been fortunate to have visionaries and risk-takers at the helm of our institution.

Dr. George O. Bierkoe (1939-1971), Dr. Eleanor E. Tupper (1971-1980)
Dr. George O. Bierkoe and Dr. Eleanor E. Tupper were the husband-and-wife founders of Endicott College, along with Dr. Tupper's parents, Clarence and Ella Tupper. Dr. Bierkoe graduated from Muhlenberg College in 1922 and became a Lutheran minister in 1925. He was the pastor of a congregation in New York. Eleanor graduated from Brown University in 1926 and from Clark University with a doctor of philosophy in 1929. Both had an idea that was realized and fulfilled—to educate women for greater independence and to enhance their position in the working world. The College emphasized the ideals and standards along with the practical aspects of education, including the unique element of internships. Internships continue today as a major component of the Endicott experience.

Dr. Carol A. Hawkes (1980-1986)
Dr. Carol A. Hawkes was the third president of Endicott. Dr. Hawkes received her Ph.D. from Columbia University in 1949, and was an English professor before becoming vice president and dean of Hartwick College in 1975. Dr. Hawkes was active on the North Shore and served as a member on the boards of the Bank of Boston Essex, Beverly Hospital, and the North Shore Chamber of Commerce.

Dr. Francis C. Gamelin (1986-1987)
Dr. Francis C. Gamelin served on the Board of Trustees at Endicott from 1966 to 1988. At that time, the Board voted him Trustee Emeritus. During the 1986-1987 academic year, Dr. Gamelin served as president while the search for a new leader was underway. Dr. Gamelin received his Ph.D. from the University of Minnesota. Prior to his retirement, he served as president of the Higher Education Center of St. Louis, chief executive of the Central States College Association, and executive secretary of the Lutheran Church in America Board of College Education.

Assuming the presidency in 1987, Dr. Wylie came at a time when the school was facing declining enrollments and financial uncertainty. Many acres of College property had been sold, and members of the Board of Trustees were considering bids from other colleges to purchase the school outright. With what the Endicott community would come to recognize as his customary optimism and energy, he persuaded the trustees to give him a year to develop a plan to not only save but also expand the College and its offerings. His one-year reprieve became a 31-year presidency during which Endicott became a heralded success story in higher education.

Dr. Wylie was able to recruit top-level administrators and faculty who believed in his vision of what Endicott could become. He also inspired Endicott’s staff to come together as a community and build on their strengths. The result was a strategic plan for growth, a financial model to stabilize assets and support new initiatives, and an expansion of academic programs that would attract new student populations.

Earning the nickname “hard hat president,” he presided over the design, financing, and construction of 26 buildings on the campus including academic facilities, residence halls, sports complexes, and an arts center. An additional 100 acres were acquired, many containing oceanfront properties that were converted for student use. In the last years of his presidency, the College’s endowment grew from less than $3 million to more than $83 million; and the value of the institution increased from approximately $30 million to more than $150 million.

Campus improvements and financial restructuring were only part of Endicott’s renaissance. As a former vice president and dean at Lesley College, dean at the University of Colorado, and department chair at Temple University, Dr. Wylie brought experience in teaching, program development, educational theory, and administration to the College.

Dr. Kathleen H. Barnes, Interim President (2018-2019)
Dr. Kathleen H. Barnes, Endicott College’s sixth president, has been a pioneer throughout her professional career. Dr. Barnes stepped into the role of interim president after Endicott’s fifth president, Dr. Wylie, passed away in May 2018. She led by example when it came to being “Endicott Strong” and kept Dr. Wylie’s vision alive during her tenure.

Often referred to as the “Dean of Student Happiness,” Dr. Barnes has dedicated her life to the advancement of Endicott as an alumna, former senior vice president and dean of academic success, and most recently as interim president. Dr. Barnes has focused on improving the student learning experience through work with retention, student success, accessibility services, universal design for learning, academic advising and technology, tutoring and library services, and first-year experience.

With an eye toward her passion for accessible education, Dr. Barnes has served on international foundation and organization boards with similar missions. Dr. Barnes has published works in assistive technology and regulatory statuses in the fields of rehabilitation engineering, universal design, and physical therapy. She also assisted in the authoring of state and national legislation regarding ethics and regulation of allied health professions and the Americans with Disabilities Act. 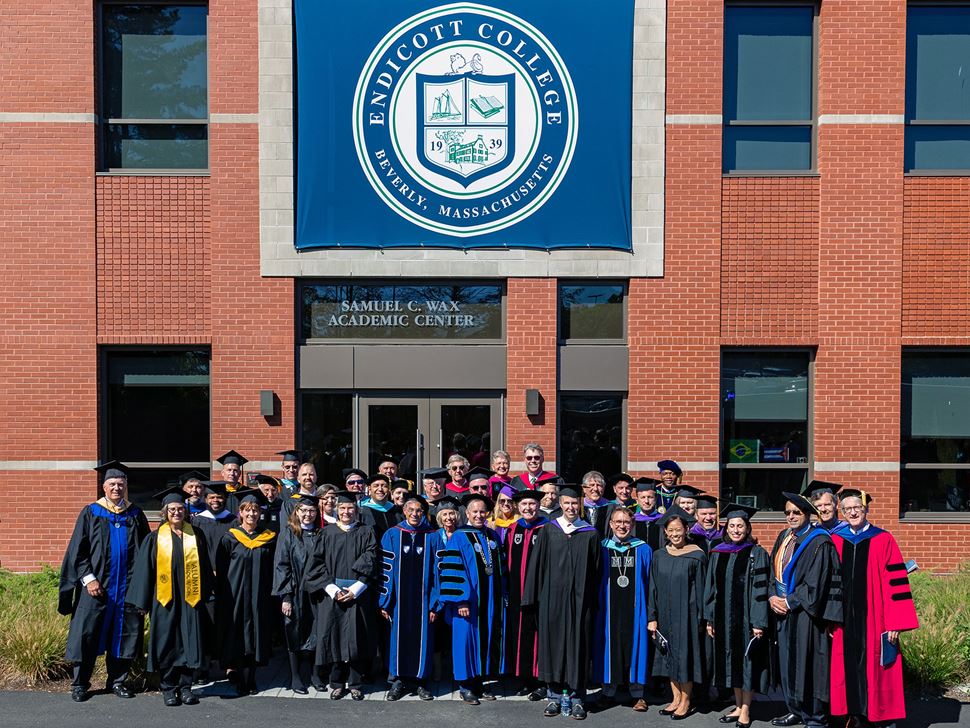