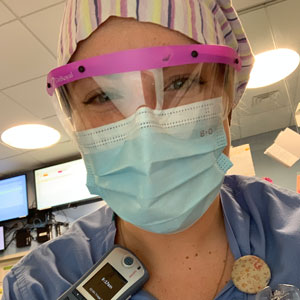 The life of an emergency room nurse is always extremely hectic, and those feelings have notably intensified during the coronavirus. However, one such nurse, Jeanna Barbieri ’12 is fighting not only against a virus, but against patient loneliness caused by necessary “no visitor” policies in hospitals.

Barbieri works at Lowell General Hospital and she has recently begun making headlines on major networks like CNN and Boston 25 News for her work on a project called Pictures for Patients, an effort that helps patients stay positive during this pandemic when they can’t be in contact with their families and other loved ones.

The initial idea for the project stemmed from a simple conversation with a high school friend who wanted to thank her for all the work she was doing during the pandemic. She says, “After talking with him a bit, I found out his dad was in our ICU and I offered to bring pictures or anything else his father needed as I was already going to the hospital. He and his family printed some pictures and I picked them up from their mailbox on the way into my shift. The next day, I realized that this was something that could really help a lot of families, especially after seeing how happy it made his.”

What began as a simple favor for a friend quickly became a good news sensation. Barbieri says, “I never even considered there would be a response like this! I'm someone who doesn’t even know what to do when people sing me happy birthday, so this has been something else for me.”

The patient and family reactions have both been phenomenal. All the people that Barbieri has worked with have been incredibly thankful that someone is looking out for their loved ones while they can’t. At this point in time, she is receiving photo delivery requests from between one and five families each day. To date, she has made 30 successful picture deliveries.

Barbieri is happy to offer this additional level of care to her patients during the coronavirus outbreak, but in general, she thinks that things are proceeding as they always have in the emergency room, but with a different layer of emotions. She says, “Being on the frontlines is very surreal right now. It's been a constant state of change and adaptation, but overall the basis of what we're doing is what we always do: showing up to care for people who need us. I work in the emergency room, so we deal with a lot of unknowns, but we're working as a team to tackle every single situation we face.” 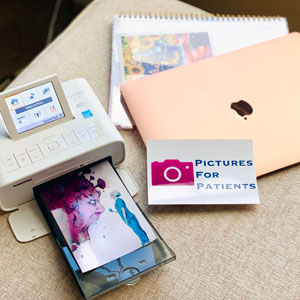 We are proud that nurses like Barbieri are helping the community remain positive. We asked her what advice she has for others who need help with that. She says, “I read something last night that perfectly sums up my state of mind right now: ‘We are one day closer to the other side.’ I think we all tend to feel entire situations at once, so I keep trying to focus on one day, one shift at a time. There's not much that can be controlled right now (or ever), so I just try to keep my mind on what I can, and eventually we will be through this.”

Though she is unsure of whether or not the project will continue after the battle against the virus has been won, she is excited for it to expand. She says, “Right now, I am just making sure that I am tending to all the requests that I am getting and I am so happy to see other hospitals adding this to their practices as well.”
Speaking of growth, Barbieri welcomes others to bring the effort to their hospitals or other care facilities. She simply asks that they use #PicturesForPatients so that she can watch it grow.

Note: Since we published this story, Barbieri has also been featured on WGBH News' "In It Together" with Arun Rath and ABC 6 Action News in Philadelphia.