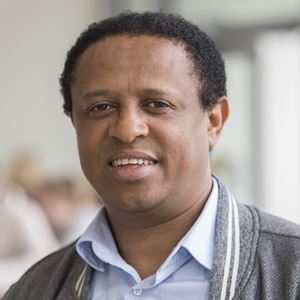 Semahagn Abebe holds three postgraduate degrees, and has more than six years of experience in teaching and research in multidisciplinary settings. Working as an educator and a researcher in different institutions, including the National University of Ireland, McGill University, the University of Connecticut and Endicott College, Dr. Abebe has acquired experience and skills in teaching and research in areas of economic and social justice, conflict resolution, human rights, and international law.

The Vices of Authoritarian Developmentalism in Ethiopia, New Research Voices: International Journal of Research From the Front-line, Vol I, January 2016.

The Relevance of African Culture in Building Modern Institutions and the Quest for Legal Pluralism, Saint Louis University Law Journal, Vol. 57, No 2. (2013).

Transfer of Technology in Ethiopia, Ethiopian Journal of Research and Innovation Foresight, Vol. 3, No 2. (2011).

The Implications of Rules of the World Trade organization (WTO) to Ethiopia's Financial Sector Policies, Ethiopian Journal of Economics, Vol. XIX, No 1. (2010).

Lecture, The Stifling of Democracy and the Repression of Academic Freedom in Ethiopia, Vassar College, 06 April 2016.

Lecture, The Prospects and Challenges of Democracy and Protection of Human in Rights in Ethiopia, Mercy College, 24 March 2016.

Lecture, The Prospects and Challenges of Governance and Development in Africa,  Endicott College, 23 March 2016.

Presenter, Federalism as a Response to the Accommodation of Cultural Diversity: The Case of Ethiopia, in Perspectives on Interculturality, the Centre for Intercultural Studies, Saint Louis University, April 28-March 1, 2013.

Presenter, The WTO System and the Liberalization of the Financial Sector in Sub-Saharan Africa, in Emerging Economies in Globalized Financial Markets, Martin Luther University, Hale, 21-22 June 2012.

Presenter, Ethnic Federalism and the Protection of Human Rights in Ethiopia, in Law, Power-sharing and Human Rights, University of Antwerp, 9-12 May 2012.

Presenter, The Debate on the Compatibility of African Culture to Liberal Values and the Quest for Legal Pluralism, Centre for International and Comparative Law, Saint Louis University, 1-2 March 2012.

Presenter, Constitutional Design for Multicultural Nations: The Ethiopian Perspective, in ˜Societies in Transition: Sub-Saharan Africa between Conflict and Reconciliation, University of Jena, 18-28 July 2011.

Presenter, The Challenges and Opportunities of Ethnic Federalism as a Peace Building Strategy in Post-Conflict Countries: the Case of Ethiopia, in Post-conflict Peace-building and Reconstruction in Societies Emerging from Conflict, Desmond Tutu Centre for War and Peace Studies, Liverpool Hope University,  Liverpool, 17-18 June 2011.

Presenter, A New Approach to State Formation in Africa: the Transformation of the Ethiopian State from Central to Federal, in Continuities, Dislocations and Transformation: Reflection on 50  years African Independence, the German  Association for African Studies, Johannes Gutenberg  University, Mainz, 7-11 April 2010 .

Op-Ed Saudi Arabia's treatment of Ethiopians has been shameful, January 8, 2014, The Montreal Gazzete.

The Implications of Politicized Education for Academic Freedom in Ethiopia, in Scholars at Risk   University Values Bulletin, New York, July 2013.

In 2014, Routledge published my book ˜The Last Post Cold-War Socialist Federation: Ethnicity, Ideology and Democracy in Ethiopia. I have also published peer-reviewed articles in, among others, the Saint Louis University Journal of Law, McGill International Journal of Sustainable Development Law and Policy, the Journal of African Studies and Development, and the Goettingen Journal of International Law.

Board Member, African Community Education ( since 2015)

Central themes of my scholarly research include economic and social justice, ethnicity and culture, as well as human rights in sub-Saharan Africa. One of my focus areas of scholarship relates to the interaction between economic development and human rights in sub-Saharan Africa. My research addresses the human rights implications of Foreign Direct Investment (FDI) in sub- Saharan Africa. Since sub-Saharan Africa needs capital and technology for ensuring sustainable development, soliciting of FDI from industrialized and emerging economies has surged in the last two decades. Nevertheless, such investment opportunities have brought about environmental degradation, expulsion of rural families and indigenous groups from their lands, and the exploitation of local communities by international companies. My research focuses on the implications of agricultural and industrial investments on human rights and the environment in Africa. I also conduct research on the prospects and challenges of achieving food security in sub- Saharan Africa.