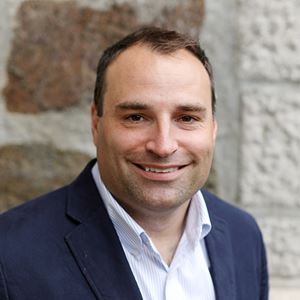 Rob Palardy, who served as Endicott's Sports Information Director from 2010-15, enters his first academic year as Assistant Athletic Director where he will be overseeing the development of the athletic communications and intramurals offices while coordinating the athletic departments efforts in several other areas.

Since the 2010-11 academic year, Palardy has effectively publicized and promoted the nearly 700 student-athletes that compete for Endicott™s sport programs. Specifically, Palardy monitored and facilitated Endicott™s regional and national media exposure, the department™s online web presence through the www.ECGulls.com website and social media outlets including Facebook, Twitter, Instagram, and YouTube, organized all game day coverage including statistics and pre- and post- game outreach, and tracked all historical data.

Palardy has coordinated three website redesigns in his athletic communications career, two with Endicott in 2010 and 2013 and one with his former employer Lesley University in 2008. He has extensive experience working with website management companies including PrestoSports and Sidearm as well as experience using HTML coding for web editing.

Palardy is a 2006 graduate of the Isenberg School of Management at the University of Massachusetts-Amherst where he was a sport management major. He is currently pursuing his Master of Business Administration in Project Management from Endicott™s Van Loan Graduate School of Professional Studies. He is a contributing member to the College Sports Information Directors of America (CoSIDA) and the Eastern College Athletic Conference Sports Information Directors Association (ECAC-SIDA).